More than 1,000 Soldiers, Spouses To Go through Program in Next Two Months 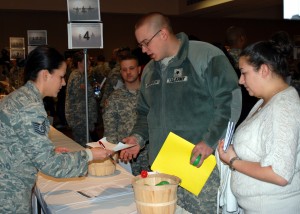 Over the next three months, 1,700 members of the 27th Brigade Combat Team who returned from a 10-month long Afghanistan deployment in December and early January will go through the program along with their spouses and children. This is about same number who went through the program to date.

“This is the largest unit reintegration we’ve conducted since we launched our Yellow Ribbon Reintegration Program a year ago,” said Major General Joseph Taluto, the Adjutant General and Commander of the New York National Guard. “We want to incorporate everything we’ve learned in running smaller units through the process and add new programs.”

In September 2007 and in January 2008, the New York Army National Guard mobilized almost 1,700 members for service in Afghanistan, training the Afghan National Army and Police. It was the largest deployment since about 3,500 New York Guard members served in Iraq in 2004/05.

Now these Guard Soldiers are back home and trying to fit back into civilian life. The goal of the Yellow Ribbon program is to help them do that, said Col. Curtis Williamson, the director of human resources for the National Guard. “We help them find the new normal,” Williamson said.

To accommodate those Soldiers, the New York National Guard is holding reintegration events in Western New York (Rochester) the middle of the state near Albany, and in Westchester County, just north of New York City.

“The way this is organized, put together and carried out is phenomenal,” said Command Sgt. Major John Gipe, the Army National Guard Command Sergeant Major who was present at the Rochester event. “I am so impressed with the content of the program and the number of people here to attend the program, it’s just incredible,”

“You’ve done something most Americans could not do and would not do,” Chaplain (Lt. Col) Eric Olsen told the Soldiers during the day’s opening session.

For Spec. Peter Phillips, coming home meant getting reacquainted with his finance Danielle Fry, who he’s dated since high school.

“We’ve been together for seven years now, high school sweethearts, and then I leave for a year; you don’t know where to start. You don’t know exactly where you left off,” he said.

For 1st Lt. Frank Washington, a member of the 427th Brigade Support Battalion, coming home meant dealing with feelings of being left out of the family. His wife was now making decisions he used to make and he wanted to get back into the family circle. But the program helped him understand what his wife went through while he was gone, Washington said.

Alicia Washington, meanwhile, said being together with other military families, and her husbands colleagues, helped her understand what he went through in Afghanistan.

Taluto, urged the Guard members and their families to do the hard work it takes to work through the issues of separating and coming home again. “This is about you individually, behind every face there is a story,” Taluto said.

The Yellow Ribbon Reintegration Program mandates that all Soldiers be present for paid assemblies at approximately 30 and 60 days after their return from a combat deployment. The events are held in non-military settings at hotels paid for by National Guard Bureau. Families are encouraged to come but are not required to be present.

At the 30-day event Soldiers and their spouses are welcomed home by the Adjutant General, view a welcome home message from the governor, and get some basic briefings on indicators of stress and how to work to reintegrate back into home life and civilian jobs.

They also participate in a “Provider Fair” where they learn what military, non-military and veteran’s services they can take advantage of.

At the 60-day events the work gets more intense. Each veteran will see a non-military Veterans Affairs counselor for at least 15 minutes to try to identify any issues they have or need for more help.

At a 60-Day session held in January, 67 of the 150 Soldiers present asked for help of some kind. That indicates there is a need for these services, Taluto said.

The New York State Department of Labor will also hold a career fair for Soldiers at the 60-Day event.

The goal is to keep changing the program to make it more relevant to the new combat veterans, Taluto said. “New York has this wrapped up solid,” said Army Guard CSM Gipe. “They have done a tremendous, tremendous job and I’m very glad I had the opportunity to see this first hand.”