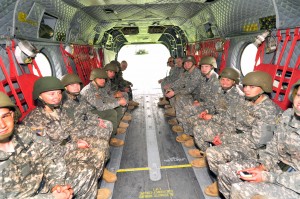 MACHIAS, N.Y. - RSP stands for Recruit Sustainment Program. The 42nd Combat Aviation Brigade (CAB) initiated a policy this year of familiarizing all future 42nd CAB RSP Soldiers with helicopter orientation flights in order to give Soldiers a taste of why they are joining the CAB. The RSP is a fully functioning program that encompasses all non-prior service Soldiers enlisted in the New York Army National Guard. Elements of the 42nd Combat Aviation Brigade have been airlifting RSP Soldiers since October, 2008.

On May 2, Detachment 1, Company B, 3rd Battalion, 126th Aviation used this program to familiarize and orient future aviation Soldiers. The 126th flew their CH-47D aircraft, commonly known as a Chinook, onto a farmer’s field in Machias. From there, they conducted an aircraft familiarization class and the orientation flight lifted off straight from the field.

These pre-basic training Soldiers perform weekend RSP drills each month up until they ship to basic and advanced individual training. The RSP strategy is to expose new Soldiers to a military environment through training focused on decreasing training losses within New York. The RSP Program’s success is based upon training that prepares each Soldier physically, mentally and administratively to successfully complete his or her training and become Military Occupational School (MOS) qualified in the aviation field the Soldiers enlisted in to.

The RSP Soldiers who participated in the May 2 aviation flight experience stated it was the highlight of their weekend this month. The local Army recruiters also used the experience to discuss the local 642nd Aviation Support Battalion’s mission in support of the 126th Aviation Battalion’s Detachment stationed in Rochester and what each MOS within the 642nd does in support of the unit’s mission. The 642nd also has companies in Dunkirk and Olean.

As one of the Soldiers’ stated after the May 2 event, "It was the experience of a lifetime that I will never forget." I look forward to conducting this same experience in the future for other new RSP Soldiers who enlist in the New York Army National Guard and the local 642nd Aviation Support Battalion stated Master Sgt. Scott Anderson, recruiter.