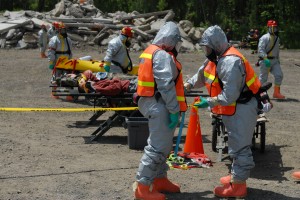 The three-day exercise brought members of the New York National Guard’s CERFP-an element trained to rescue survivors from contaminated attack sites-- from Buffalo, the Finger Lakes and New York City, to the state capitol to exercise with civilian urban search and rescue experts in finding victims buried in building rubble.

The joint exercise provides all elements of the CERFP, which stands for CBRNE (Chemical, Biological, Radiological, Nuclear, and high-yield Explosive) Enhanced Response Force Package, an opportunity to see each other in action and work together, said Air National Guard Lt. Col. Ken Kieliszek, a health services administrator from the 107th Airlift Wing, based in Niagara Falls.

The scenario called for the New York CERFP, one of 17 in the country, to be mobilized to assist Albany authorities in dealing with an apartment building explosion. Police suspected that a premature detonation in a bomb-makers hidden laboratory was responsible for the incident.

The New York CERFP is composed of elements from different units.

The medical element of the team is supplied by medical personnel from all Air National Guard wings. For this exercise the security element, responsible for working with civilian police to secure the area was handled by a mix of Air National Guard security force elements.

The CERFP, which had been on standby to deal with the “Empire 09” incident was mobilized and members traveled by convoy, bus, and plane to Stratton Air National Guard Base in Scotia for a “bed down’ with the 109th Airlift Wing.

Finding the space for 350 extra people during a drill weekend in which 1,000 109th members were already on the base was challenging, said Air Guard Major Ty Randall, the 109th’s Civil Engineering officer. The wing accommodated almost 300 people in one of its hangers, and put other exercise players in other available spaces.

It was a good opportunity to exercise the 109th’s role in receiving emergency responders and supplies into the Capitol Region, Randall said.

On Saturday, the CERFP teams moved to the New York State Office of Fire Prevention and Control Training Center in Colonie. They teamed up with members of New York Task Force-2, the state’s urban search and rescue team, to explore a rubble pile on the site which simulated an apartment building.

Training with the National Guard gives the civilian responders a sense of how the military operates and a chance to share their skills, said Chief Bryant Stevens, head of the Office of Fire Prevention and Control’s Special Services division.

“It puts faces with names and starts to build relationships with some of the different components and different people,” he said.

After arriving on scene the CERFP began erecting decontamination and treatment tents and the extraction team began donning hazmat suits.

The hot weather made the day less than idea to be wearing a suit that is essentially a plastic tarp, said Spec. Arom Schultz, a member of the 105th MP Company.

The CERFP hazmat suit is lighter than the MOPP suit (Mission Oriented Protective Posture) most Soldiers and Airmen are familiar with, but it doesn’t breathe and is not as comfortable, Schultz explained. “It’s just a lot hotter,” he said.

About 30 members of Joint Forces Headquarters acting as victims ( I was “volun-told”, joked Staff Sgt. Brian Manny) were pulled from the rubble with various kinds of injuries, decontaminated and treated.

An OH-58 helicopter equipped to beam live video from the site back to the state Joint Operations Center, and high-tech satellite command and control equipment were also integrated into the exercise.

New York Guard Sgt. First Class Emil Mejia, said the New York CERFP has come a long way since 2003 when it was a New York Guard mission only. There is more and more training, and more manpower dedicated to the mission now, Mejia said.

“I’ve seen it come from the crawl stage to the run stage,” he added.

Lt. Col. Martin Dinan, the commander of the 102nd MP Battalion and the CERFP, said he was especially pleased with the June exercise.

“This is really coming out great. It’s good to work with the state fire and some of the other capabilities,” Dinan said. “ It seems like we are really starting to hit the run mode and, as a matter of fact, we are starting to talk about some new capabilities to being to the table.”