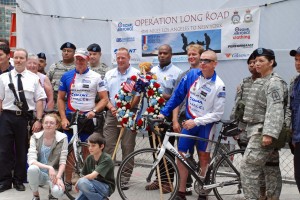 Members of the New York National Guard’s Joint Task Force Empire Shield joined representatives of the New York Police and Fire Departments in welcoming a British Team that bicycled across the United States to New York on Saturday, June 13. The five-man British Team, two Royal Air Force members and three London Metropolitan Police Officers were riding across the country as a fundraiser for wounded British veterans. The New York National Guard coordinated with New York City Officials to allow the British cyclists to lay a wreath at Ground Zero, where the World Trade Venter once stood.

The two RAF veterans, Nick Styles and Jason Lewis, rode across the United States as part of an effort, called Operation Long Road, to raise funds to help wounded British veterans of Afghanistan and Iraq. Lewis is himself a wounded veteran. They finished their ride with a wreath laying ceremony at the site where the World Trade Center used to stand prior to the terrorist attacks of September 11, 2001.

The two RAF members were joined by three police officers of the London Metropolitan Police force in the transcontinental ride which began on May 4 at the Santa Monica Pier in California. Medic Roy Hunte, bike mechanic Andrew Jones, and driver Peter Taylor escorted the two bike riders across the United States.

The five men wanted to finish their ride by honoring the almost 3,000 Americans and others who died on Sept. 11. They reached out to New York Army National Guard Lt. Col. Paul Fanning, New York’s Public Affairs Office, for help, and Fanning organized a welcoming ceremony and a wreath laying for them.

The celebrations at the finish line, with the presence of the military, the police and the fire departments, and members of the public, made it very special, Styles said.

“It has been an outstanding trip across a great country, and we thank everybody who has made it possible,” he added. The five men were also hosted to a tour of the historic Lexington Avenue Armory, home of the 1st Battalion 69th Infantry, following the wreath laying.