Media Unveiling for the MQ-9 Reaper 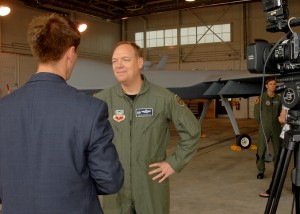 Hancock Field Air National Guard Base, Syracuse, NY -- On Friday the 26th of June the men and women of the 174th Fighter Wing introduced the MQ-9 Reaper Unmanned Aerial System to members of the Syracuse media.

Television, Radio and Print outlets were invited to Hancock Field ANGB and given a detailed briefing of the 174th FW newest weapons system by Col. Kevin W. Bradley, 174FW Commander. Col. Bradley briefed the members on the Unmanned Aerial System, which includes the MQ-9 Reaper and the Ground Control Station. He told them the unit will begin flying Combat Air Patrols with the MQ-9 starting in November 2009, while the unit continues to fly the F-16 till March 2010.

The media was then bused to the hangar that houses the MQ-9 Reaper, where they were able to photograph, video the MQ-9 Reaper, while conducting further interviews with other key members of the 174th FW. From here the media was transported to the Field Training Detachment, which will be responsible for all MQ-9 Reaper maintenance training for all U.S. Air Force Active Duty, Reserve and Air National Guard maintainers.

Within the FTD building is the fixed Ground Control Station, which is where the Pilot and Sensor Operator sit and control the aircraft via Remote Split Operations. Each member of the media was given the opportunity to further document the facility and GCS, as well as conduct additional follow-on interviews with the various subject matter experts.

The MQ-9 Reaper is a medium-to-high altitude, long endurance unmanned aircraft system. The MQ-9’s primary mission is as a persistent hunter-killer against emerging targets to achieve joint force commander objectives. The MQ-9’s alternate mission is to act as an intelligence, surveillance and reconnaissance asset, employing sensors to provide real-time data to commanders and intelligence specialists at all levels.

The typical system consists of several air vehicles, a ground control station, or GCS, communication equipment/links, spares and people who can be a mix of active-duty and contractor personnel. The crew for the MQ-9 is a pilot and a sensor operator, who operate the aircraft from a remotely located GCS. To meet combatant commanders’ requirements, the MQ-9 delivers tailored capabilities using mission kits that may contain various weapons and sensor payload combinations.

The 174th Fighter Wing was formed on October 28, 1947 as the 138th Fighter Squadron. The 138th FS was the first post-WWII Air National Guard flying unit in New York State. The unit flew P-47D Thunderbolts and was based at the former Army Air Force facilities at Hancock Field.