September 23, 2020 | 12:31 pm Information on Novel Coronavirus
Coronavirus is still active in New York. We have to be smart. Wear a mask and maintain 6 feet distance in public.
Get the Facts 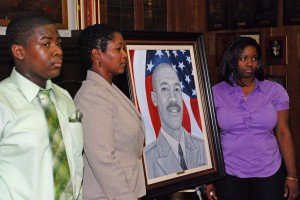 JAMAICA ARMORY, QUEENS -- A painted portrait of the late New York Army National Guard Sergeant First Class Joseph McKay of Queens was presented to his family at a special ceremony at the Jamaica Armory on Friday, 10 July.

Mrs. Rose McKay and members of the McKay family were joined by friends and dozens of Soldiers of the 1st Battalion 258th Field Artillery, for a special presentation and remembrance.

“That’s my Joseph,” said Rose as looked on the painting through tear-filled eyes with her son Shane, age 15 and daughter Tanisha, age 23. “Thank you. This means so much to us,” she said.

Texas artist Phil Taylor and his wife Lisa of the American Fallen Soldiers Project came to New York to personally present the portrait to the family. At the family’s request, a ceremony was organized at McKay’s former armory so that friends and fellow soldiers could attend.

The American Fallen Soldiers Project is a 501 3 non-profit organization committed to honoring the memory of fallen military personnel by presenting the next of kin with custom portraits of their late loved one at no cost. The project is supported by American Airlines which transports the portraits and the artist free of charge from Texas to locations around the country for in-person presentations. For more information go to www.americanfallensoldiers.com

Joseph McKay was among 1700 members of the New York National Guard’s 27th Infantry Brigade Combat Team that were mobilized and deployed to Afghanistan in 2008 as Combined Joint Task Force Phoenix VII. Sergeant First Class McKay, Specialist Mark Palmateer from Poughkeepsie and Sergeant First Class Matthew Hilton of Livonia, Michigan were killed in an ambush on their convoy on June 26th 2008 when an Improvised Explosive Device struck their vehicle in Eastern, Afghanistan. McKay was a career New York National Guard Soldier who first joined in 1977 and served continuously until his death last year. He was a naturalized American citizen from Guyana, South America and lived with his wife and two children in Queens.

He was called to State Active Duty following the 9-11, 2001 terrorist attacks on the World Trade Center and continued to serve as a volunteer with the Guard’s Task Force Empire Shield providing security support to the civil authorities at New York City’s airports, train stations and other sites until his mobilization and deployment last year for Afghanistan.