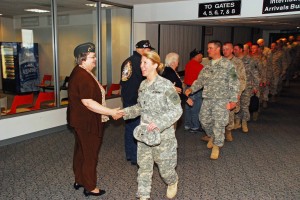 First Lieutenant Amy Bonanno from Newtonville, NY is welcomed by a Maine Troop Greeter at the Bangor Airport on April 4, 2008 as the New York Army National Guard’s 27th Infantry Brigade Combat Team ships out for Afghanistan. Behind her is Capt. Mike Fullam from New York City, who is also a New York Police Officer.

NEW YORK CITY -- A movie now running in New York City tells the story of the Maine Troop Greeters who met members of the 27th Brigade Combat Team during their deployment to Afghanistan in 2008.

“The Way We Get By” tells how the group, which operate atthe Bangor Maine Airport,got started back in 2003. These volunteers have welcomed, supported and cheered more than 900,000 U.S. military personnel coming to and from the combat zone so far and they are still at it.

The action follows the three as they juggle separate schedules to greet planes of hundreds of troops who arrive at various times around the clock. The movie is built around a series of interviews and events woven together in a tapestry of inner strength, concern, vulnerability and patriotism. It provides a unique and special view on “what it means to grow old in America.”

It also shows the bonds built with service men and women and the mostly elderly veterans and others from the community. While the troops wait for their plane to be serviced they are offered the free use of cell phones and the company of their hosts in the Troop Greeters’ welcome center.

“The Way We Get By” is the creation of director Aron Gaudet, whose mother Joan is in the film. Producer Gita Pullapilly led the interviews and film sequences which were done over a 3-year period.

“Witnessing first hand how her life changed in such positive ways, while at the same time touching the lives of troops from all over the country, convinced me this was a special story that could inspire people,” wrote Aron Gaudet about his mother’s role as a troop greeter. “This is a unique film, encompassing important social issues and controversial topics, while remaining a story that every American can support.”

The film has already won a dozen awards at independent film festivals around the country. “We need a good box office showing in New York City and in Los Angeles in order to get more theater showing opportunities,” explained Gita Pullapilly. The production team has launched a dual promotion program offering free tickets to veterans and elderly through a “Bring a Vet” and “Battle Buddy” campaign.