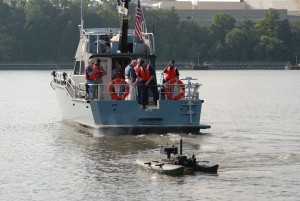 The MUSCL, launched from New York Naval Milita Patrol Boat 400 gets underway in the Hudson River off the Indian Point nuclear power plant during a trial conducted as part of Exercise Trojan Horse, a State University of New York Maritime College exercise supported by the Naval Militia. (Photo by Eric Durr, NYS Division of Military and Naval Affairs)

The small boat, consisting of television and forward looking infrared radar sensors, works like a nautical version of the land-based anti-IED robots used in Iraq and Afghanistan to investigate and eliminate explosive devices, is called MUSCL.

The MUSCL (Modular Unmanned Surface Craft Littoral) is “easy to steer, locks onto a heading, semi autonomous and straight-forward like operating or playing a Sony Play Station,” explained Lee Cofer, a project manager with the Naval Surface Warfare Center from Panama City, Fla.

The exercise was part of a joint training exercise with civilian experts from the U.S. Navy Surface Warfare Center, the New York Naval Militia and the Combating Terrorism Technical Support Office headquartered in Alexandria, Virginia for Trojan Horse 2009, a maritime security exercise run annually by the State University of New York Maritime College.

In the complex task of protecting New York State, initiatives like the Trojan Horse 2009 exercise highlight the joint commitment between the N.Y. Naval Militia and other federal agencies to develop and foster new collaborative means of patrolling New York’s waterways.

Since September 11, 2001, the New York Naval Militia firmly established its role in Defense Support to Civil Authority (DSCA) through the creation of the Military Emergency Boat Service (MEBS) whose state-wide missions includes support to U.S. Immigration and Customs Enforcement and border protection on Lake Champlain and support to the U.S. Coast Guard inspections of commercial shipping in New York Harbor.

“Port maritime security is very important for homeland defense from both a domestic and international perspective,” said Major General Robert L. Wolf, the commander of the New York Naval Militia and Maritime College Director of Admissions in his civilian career. “By tapping into different individual agencies, we are able to achieve and secure the greater good for the people of the state.”

The general also noted how efforts in the past proved to be very successful such as the case of recovering the debris from TWA Flight 800 and the presence awareness following September 11, 2001.

Uniquely, the MUSCL allows real world scenarios without the worry of losing life. Crew members are able to view a video range and provide control up to two miles away, an essential capability for the various scenarios during the Hudson River training. Such scenarios included monitoring of suspicious vessels potentially armed with bombs and intercepting smugglers transporting weapons, drugs and/or people.

“It is absolutely a perfect opportunity to demonstrate our ability to work with a federal agency such as the U.S. Navy to become a force multiplier at trafficking criminal intent on NY waterways,” Commander Don McKnight of the New York Naval Militia said.

The Hudson River proved to be an ideal location for training and testing the latest in littoral warfare as a potentially armed vessel for the exercise inched closer and closer to the perimeter of the Indian Point power facilities, only to be intercepted by the MUSCL in a very coordinated and timely manner.

Phil Thompson of the Combating Terrorism Technical Support Office (CTTSO) spoke highly of his appreciation of New York State’s commitment to advance new technological means to expose how different applications can be used to expose and relate to real world mission needs. However, his emphasis was more direct, “this was the first time we [CTTSO] involved ourselves in this type of exercise at a state level.”