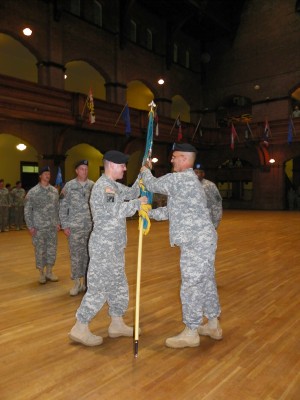 BUFFALO -- Under the vaulted ceiling of the historic Connecticut Street Armory, one commander handed the reins of the 27th Brigade Special Troops Battalion to another Sunday afternoon.

“Lt. Col. Sanders exceeded every expectation from the state and nation,” Slack said during the change of command ceremony.

Slack discussed Sanders’ service not only as the BSTB’s commander since Nov. 15, 2006, but also as the 27th Brigade’s rear-detachment commander during the brigade’s recent deployment to Afghanistan in support of Combined Joint Task Force Phoenix.

“His eye to seeing you as people first is central to his success as a commander,” Slack said to the battalion formation. “Through that knowledge, he led this unit to the superior state that I find it in today.”

“Being a commander is what I consider to be the signature achievement in my career,” Sanders said during his official remarks to the unit. “I’m very proud of you.”

Sanders, a native of Springfield, Mass., earned business degrees from Holyoke Community College and Western New England College, as well as a Masters in Business Administration degree from the University of Buffalo. He is currently enrolled as a Ph. D. student at Northcentral University in Arizona. Sanders worked for Daimler Chrysler for more than 18 years. He served in Operation Desert Storm in 1991 and Operation Iraqi Freedom III in 2004-2005 as a liaison officer for New York’s 42nd Infantry Division.

He said what he’ll miss most about the Special Troops Battalion is the people.

“The NCOs and enlisted people carried the day,” he said. “They trained my officers well.”

For his part, Burke told the gathered Soldiers of the battalion that he looked forward to leading them, and briefly laid out a list of his top priorities: accomplishing the mission, taking care of troops, making good and honest decisions, training and empowering subordinates, and smiling.

Burke began his military career as a Marine lieutenant, in 1981. He completed his term of service with the Marine Corps and moved back to Western New York, and joined the Army National Guard in 1998. Since then, he has deployed with Operation Iraqi Freedom III and served as the mobilization and readiness officer for the New York National Guard during the terrorist attacks of Sept. 11, 2001.

Burke said his background in the Marine Corps provided a solid foundation for his career as an Army officer.

“I tell people that I was born into the Marine Corps,” he said. “But I’ve been doing this for the past 15 years now -- that’s what I do, that’s what I am. This is my identity.”

He said he is looking forward to working as a commander of Soldiers again.

“If someone asks me if I’d rather build things or lead, I want to lead,” Burke said. “Working with Soldiers is why I joined years ago. It validates everything I do.”

The 27th Brigade Special Troops Battalion provides specialized Soldiers and resources to support the mission of the 27th Infantry Brigade Combat Team. Composed of command and control elements, military police, engineers, intelligence specialists, and communications specialists, special troops battalions were created so that modular combat teams such as the 27th would have the specialized resources that did not originally exist in older-model brigades.

The 27th BSTB was formed out of Buffalo’s 152nd Engineer Battalion after the Army began creating modular brigade combat teams in 2004.