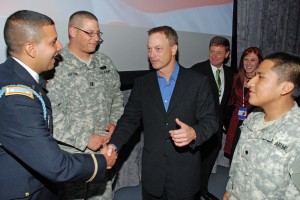 Actor and leader of the Lt. Dan Band Gary Sinise is greeted by LTC John Andonie, commander of the 1st Battalion 69th Infantry ("Fighting 69th") at a special cerenmony at the Intrepid Museum in New York City on Saturday September 12, 2009. Also in the shot is CPT Aaron Lefton. The ceremony included the unveiling of new portrait of a fallen 69th member in Iraq. SSG Christian P. Engeldrum was also a New York City Fireman who served at the World Trade Center following the 9-11, 2001 terrorist attacks. The ceremony also included the premier of a new documentary called "The Lt. Dan Band, for the common good."

NEW YORK CITY -- A fallen New York National Guard Soldier who was also a 9-11, 2001 New York City firefighter and an award-winning actor who has rendered exceptional service and devotion to the nation’s military service men and women and their families were immortalized through art during an emotional ceremony aboard the Intrepid Air, Land and Sea Museum in New York City on Saturday, September 12th.

Texas-based artist Phil Taylor of the Fallen American Soldier Project unveiled his portrait of the late Staff Sgt. Christian Engledrum of the 1st Battalion 69th Infantry, New York Army National Guard to the Engledrum family and an audience of hundreds of Soldiers, firefighters, police, veterans and friends at large. It took him over two months to complete and many conversations with Sharon Engledrum, the wife of the fallen Soldier, “to get right.”

“This is the first time a family has had to encourage me after 50 portraits,” explained Taylor before the unveiling. He spoke of his emotional and personal journey in creating portraits of fallen service members. “I am simply paying tribute to one guy that represents the totality of all who have given their life,” he said of his painting of the late Guardsman.

Joining him on the stage for the unveiling was Sharon Engledrum and sons Sean and Royce, ages 23 and 20 and daughter Chrissy age 4, who was born 7 months after the death of her father on November 29, 2004.

The former member of the 82nd Airborne Division and New York City police officer turned fireman, was photographed on 9-11, 2001 at the World Trade Center by the New York Daily News placing an American Flag with another member of his department.

Staff Sergeant Engledrum was mobilized in May 2004 with his unit and deployed to Iraq. He was killed when an IED struck the humvee he was riding in while on patrol. He is buried in Arlington National Cemetery.

Taylor is supported in his efforts by American Airlines, which is sponsoring the Fallen American Soldier Project by flying the artist and the completed paintings to special presentations, both public and private, around the nation. “We will never forget that our pilots, our flight attendants and our passengers were among the first casualties in this current conflict,” said Capt. Steven Blankenship, of American Airlines.

He explained that his company has been determined to turn the pain of its 9-11 losses into a positive effort to support service members and their families as best they can. “Most importantly,” he added, “to the families of the fallen who never signed up, folks, to pay the ultimate price of freedom -- the loss of Daddy or Mommy,” he said to the assembly.

The second half of the evening was dedicated to the premier of a new documentary about the extraordinary service of actor Gary Sinise, who is being viewed by many on a par with the late Bob Hope for his support and entertainment of troops serving overseas through the USO.

Film maker Jonathan Flora, who was also a member of the 82nd Airborne Division has produced a new documentary dedicated to the award-winning actor who has created a band dedicated to performing for troops and military families at home and abroad.

Both Flora and Sinise were on hand for the screening. Entitled “The Lt. Dan Band, For the Common Good,” the film covers Sinise and the other members of his band who have been drawn together as friends by a common interest to give back to military men and women and to the families who share, and in some cases have lost them in service to the nation.

Through interviews with the band members as well as other actors and Hollywood insiders, veterans and military members, a unique picture emerges of selfless service, humility and respect for those who are taking great personal risks for the American people. The film chronicles efforts to entertain new recruits training at bases in the U.S., flying to Iraq to entertain at Forward Operating Bases and performing special concerts to raise money for a memorial for fallen 9-11 New York City fire fighters and for the children of fallen service members. It also covers Sinise’s program of gathering donations of school supplies and other items for distribution to Iraqi children through U.S. personnel conducting humanitarian operations in the combat zones. The film includes footage of St. Patrick’s Day festivities at the home of the Fighting 69th at the Lexington Avenue Armory in Manhattan where the band played for Soldiers and family members and friends from the community last March. The evening at the Intrepid was the creation of New York City businessman Terrence Tierney and his fellow “Friends of the Fighting 69th” which has been fund raising, supporting troops and families and organizing special events since the 69th was mobilized and deployed to Iraq in 2004. Saturday’s event brought together a cross section of people from the military and veterans community, emergency response and civil authorities, Hollywood, business and industry and friends at large. There was a common theme echoed by the various speakers -- acknowledge and honor service and sacrifice on behalf of all. “Although we are here to honor Chris,” said Tierney in his introductory remarks, “when we honor one, we honor all. We are not here to mourn Chris,” he said, “but to celebrate the spirit of Chris Engledrum, who represents the tens of thousands of Americans who serve.”