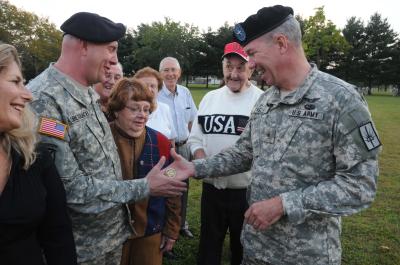 FORT DIX, NJ (October 03, 2009) - After raining for the better part of the day, clouds broke and rays of sun shone brightly down upon the four companies of Soldiers that make up the 101st Signal Battalion. Lt. Col. Greg Dreisbach was standing proudly in front ready to receive command during a change of command ceremony that took place here recently. Dreisbach will be assuming command from Lt. Col. Thomas Kilmartin, who had started commanding the battalion in 2006. Kilmartin is the second Commander for the newly added 101st Signal Battalion. “It has been a dream of mine since a young lieutenant to get the opportunity to command a Battalion,” said Dreisbach. “I promise to you all that I will do my best to lead through the upcoming challenges the are set in front of our battalion.” DreisBach was deployed to Tikirt, Iraq in 2005 where he was in charge of maintaining communications in northern Iraq. He was awarded the Bronze Star for his outstanding efforts. “There is no better honor for an officer in the U.S. Military than to become a commander,” said Brig. Gen. Mike Swezey, Commanding General for 53rd Troop Command. Col. Stephanie Dawson, Commander, 369th Sustainment Brigade, noted that she is looking forward to working with Dreisbach and knows that he is ready to hit the ground running and that he has a wonderful foundation to lead on. “It has been my distinct pleasure to serve as the second battalion commander of this great battalion,” said Kilmartin. “I am happy to have set high standards, but I have a strong feeling of unfinished business and wish my time here could continue.”