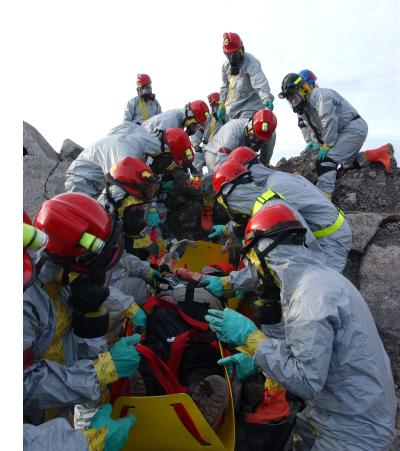 New York Army National Guard Soldiers rescue a mock casualty from a rubble heap during Operation Vigilant Guard in Tonawanda on Monday. The soldiers are part of a joint-service task force specially trained to find disaster casualties, decontaminate them if necessary, treat their injuries and evacuate them from disaster areas. Photo by Staff Gt. Ray Drumsta, 138th PAD

It’s like a disaster area -- which is the whole point for New York National Guard forces taking part in Exercise Vigilant Guard in Western New York this week.

These forces took on the disaster Monday afternoon, mounting a rubble pile at the Spaulding Fibre Site in Tonawanda to rescue mock earthquake victims. The pile simulates a building destroyed by an earthquake, and the mock victims, lying on or in the rubble, provided more realism for the training exercise.

Vigilant Guard is a national exercise program sponsored by the National Guard Bureau and United States Northern Command to provide a joint training opportunity for National Guard and emergency response organizations to build relationships with local, state, regional and federal partners against a variety of different homeland security threats including natural disasters and potential terrorist attacks.

The Spaulding Fibre Site is just one area being used for this training, which more than 1300 National Guard troops and hundreds of local and regional emergency response professionals are taking part in. The troops on the rubble pile Monday were part of a task force called CERFP, or Chemical, Biological, Radiological/Nuclear, and Explosive (CBRNE) - Enhanced Response Force Package.

The pile is composed of unstable concrete slabs, rusty steel plates and a pair of crushed cars. Pfc. Brandon Preisch, who was part of the group rescuing casualties, felt the pile lent realism to the earthquake scenario.

“It looks like a building collapsed,” said Preisch, of the 27th Brigade. “There’s debris everywhere.” It was tiring work “especially in the suits,” and the mask sometimes made it difficult to walk on the shifting debris, he added.

“When it fogs up, it gets kind of hairy, because you can’t see,” he said. Rescuers had to be careful of falling in the rubble, which contained pieces of broken rebar, he added.

While the pile made for a treacherous work environment, the wounded - who were dressed up in fake wounds and pretending to cry for help - motivated him to move quickly, said CERFP member Pvt. Jeremy Glynn of the 27th Brigade.

“Your blood starts pumping, and you really want to get those people out of the there,” he said.

In this scenario, the medical personnel from the New York Air Guard would expect to treat crush injuries, respiratory conditions and exposure to hazardous materials, said Air Guard Capt. Kelly Hall, medical plans and operations officer for CERFP. Hall, of the 174th Fighter Wing, said they would perform a fast triage and quickly stabilize victims for evacuation.

“The key thing is to get the patients out of the disaster area to definitive care as soon as possible,” she said. The airmen, she added, have been doing exercises like this since 2005, and some of the medics are even skilled in confined-space rescues.

“We’re trained for this,” she said.