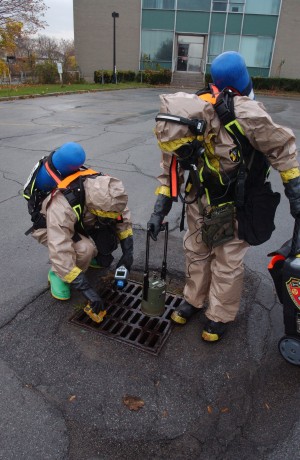 Niagara Falls, N.Y. -- Being ready to keep Americans safe from another terrorist attack, being foreign or domestic is a job that the citizen Soldiers of the National Guard take very seriously, especially when training. A Vigilant Guard exercise held the first week in November provided an opportunity for National Guard Soldiers to practice emergency response operations and to show that they are ready for any kind of incident. During the exercise the 2nd Civil Support Team received an 18 month external evaluation at a vacant Public Safety Building on Hyde Park Blvd. in Niagara Falls, November 5th, 2009. “The reason we are here today is that we are conducting the periodic evaluation for the 2nd Civil Support Team, Weapon of Mass Destruction,” said Daniel Robbins, division chief, civil support readiness group east. “Our evaluation cycle is 18 months, and we to determine the proficiency of the core competence of the 2nd CST. The scenario for the evaluation was that the Niagara Falls Police Department recently caught a leader of a terrorist cell from Canada, and the rest of the cell is still at large. The lead investigator received a letter in the mail with a white powder substance in it, and a day later the investigator became ill. Hospital reports confirmed the white powder was anthrax. According to Thomas E. Benton, deputy commander, 2nd CST, there is another envelop in the building that may be similar to the one that the lead investigator opened and local authorities needed the assistance of the 2nd CST to retrieve the letter and analyze it. The mission of the CST is to support civil authorities at a domestic Chemical, Biological, Radiological, Nuclear, High Yield Explosive (CBRNE) Enhanced Response Force Package, CBRNE incident site by identifying CBRNE agents/substances and assess current and projected consequences and advise on appropriate measures and assist with appropriate requests for state response. “We assist the incident commander with communications, medical advice, and of course identifying the substance that may be in the area, then advice on how to address the situation, once we know what were dealing with,” stated Benton. “I like to think of it as a hazardous material team on steroids; we have a lot of capabilities that we can bring to the table.” Niagara Falls Mayor Paul Dyster added that the city has a large industrial and critical power infrastructure and draws a lot of tourism throughout the year. Therefore, they are a high profile place and needs to be constantly vigilant in the field of homeland security. “We know that we can’t do everything locally, in-spite of our best efforts, from our public safety departments, to be able to protect our citizens, but also be certain that nothing happens here,” he said. “We welcome the assistance of the National Guard, we know they are here to back us up if we have a contingency that we can’t handle and we are happy to assist them in any way possible.” According to Robbins, each CST has a total of 12 tasks that must be completed for evaluation that encompasses their full mission and provides for the tasks and sections of the teams. Each of the seven sections has subtasks and sub missions they must be able to perform. “The 2nd CST is one of the original teams that was established in 1999,” said Robbins. “This team is always at the top of their game, and has always been able to demonstrate a high level of proficiency at their tasks.”