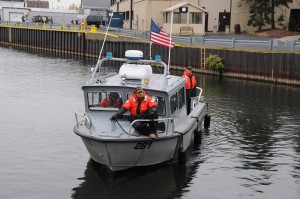 Members of the New York Naval Militia were ready and able when the call came in to participate in a Vigilant Guard exercise. BM1 Angle Santos readies the bow rope and EO2 Ed Fischer readies the stern rope as BM2 Peter Knezevic navigates the vessel to the dock. (USAF Photo/SSgt. Peter Dean)

The exercise that simulated an earthquake that measured a 5.9 on the Richter scale devastated the Niagara region. The weeklong exercise held in Niagara Falls, New York enabled both military and civilian responders to either accomplish new training or complete refresher training in a realistic environment.

Each civilian agency or military unit had their own specific tasks to accomplish. For the New York Naval Militia it was to provide search and rescue/recovery and security on area waterways.

Throughout the week, the NYNM spent their days patrolling the waterways in search of anything out of the norm. That could be a stranded boater, a simulated collapsed structure either over the water or at the waters edge, or an evildoer up to no good.

"This is a great opportunity to get hands-on-training in a very realistic scenario," said Master Chief Petty Officer Robert "Captain Bob" Clark. "This scenario is an invaluable resource, putting our training to the test," he added. "Captain Bob" has a long history of military service both in the Navy and in the Air Force.

Although "Captain Bob" has not served on duty status with the 107th Airlift Wing, as the husband of Master Sgt. Sue Clark, 107th AW headquarters, he is a valued member of the 107th family. "This is what we’re trained to do," said BM1 Angel Santos, the Coxswain (boat driver). "It’s rewarding getting the opportunity to put our skills to the test," he added.

The NYNM has along history of military service dating back to the Revolutionary War. In 1776 the first naval battle was fought on Lake Champlain, the sailors on board the ships of the small American squadron were New York Militiamen. More than a century later the U.S. Navy’s proposed national Naval Reserve Force Bill was defeated in congress.

The defeat didn’t deter the determined Militiamen from using the Navy’s organizational plans to establish numerous Naval Militias groups throughout the states.

In 1892 during the Spanish American War the New York Naval Militia was called upon to escort and protect passenger steam ships. Since that time the NYNM has been called upon to support numerous wars such as WWI, WWII and the Korean War. To date the NYNM is the only Federally recognized Naval Militia with a history of unbroken military service dating back to the Revolutionary War.

This continuous service is sure to be carried and passed on by the proud, dedicated men and women presently severing in the NYNM for years to come. "I’m very proud of my men and women," said Clark. "They performed their mission to the T, they are true professionals," he added.

The NYNM much like the New York National Guard has a dual role, standing ready to answer the call from both state and nation. The greatest difference is that the NYNM members perform their duties solely on pride, duty and their love for their country.

For they receive no financial compensation, no drill pay, no annual training days just the satisfaction that they are making a difference. "This is a great organization with great people," said BM2 Peter Knezevic. I’m proud to be a member of the militia," he added.

If you are interested in joining the ranks of the New York Naval Militia, log on to http://www.dmna.state.ny.us/nynm/naval.php?id=join for more information.