July 5, 2020 | 9:15 am Information on Novel Coronavirus
Coronavirus is still active in New York. We have to be smart. Wear a mask and maintain 6 feet distance in public.
Get the Facts 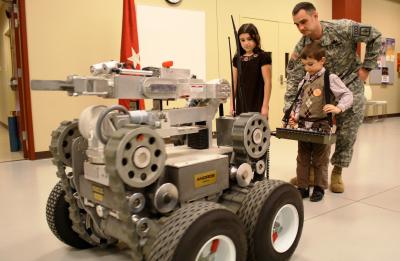 First Lt. Jeffrey Fiorito, the commander of the 1108th Ordnance Company (EOD) shows his nephew Mike Fiorito and niece Loren Fiorito how to operate one of robots the company uses to train on bomb disposal during a farewell ceremony for the unit on Dec. 8 at the Armed Forces Reserve Center in Glenville, NY (Photo by Staff Sgt. Thomas Wheeler, 138th Public AffairsDetachment.)

The company, trained to deal with improvised explosive devices, discarded munitions, and other explosives, will train at Fort Lewis, Washington before deploying to Iraq early in 2010.

“It’s a chance to do the job we were trained to do,” said 1st Lt. Jeffrey Fiorito, commander, 1108th EOD Company, and a resident of Warwick, Rhode Island. “We were trained in the full spectrum of operations,” he added.

“Our training has definitely prepared us for this deployment,” Fiorito emphasized. The 1108th has trained for about a year for the deployment in tasks ranging from explosive ordnance disposal to chemical operations, he said.

The company also completed the Global Anti-terrorism Operational Readiness Course, as well as several FBI and ATF courses providing the Soldiers with current trends in the theaters of operation they will be supporting.

Brig. General Michael Swezey, the commander of the 53rd Troop Command, charged the Soldiers with taking care of each other and trust their extensive training. He also assured the Soldiers that the New York Army National Guard would look out for the welfare of their families while they are deployed.

The state headquarters has created a first rate program to help families of deployed Soldiers, he emphasized.

Since its inception, the 1108th has supported such real world operations as the opening of the UN General Assembly in New York City, and ordnance disposal at Camp Smith Training Area in 2009.

The company will be rounded out with additional Soldiers from other units prior to heading for Iraq in support of Operation Iraqi Freedom in January 2010.