Soldiers March Across Buffalo to Collect Food for Hungry 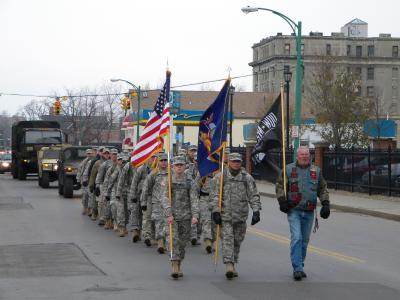 BUFFALO--Citizen Soldiers of the New York Army National Guard and Army Reserve march through Buffalo on Saturday, Dec. 5 as they collect food for the Western New York Food Bank. They are joined by "Hondo" a member of the Legacy Veterans Motorcycle Club and a Vietnam veteran. The Soldiers collected 2000 pounds of food during their 10-mile road march. (Photo by Spec. Jimmy Bedgood, 42nd Infantry Division (Released))

Led by New York Army National Guard Sgt. Kevin Lange, a Depew resident and member of the 105th MP Company, the participants in the Heroes March Against Hunger marchers generated 13, 000 pounds of food, after a 11,000 pound donation from the Wegmann’s supermarket chain was made.

The 2,000 pounds picked up at sites across Buffalo was more than double what was collected last year, said Mike Billoni, director of marketing for the Western New York Food Bank.

The Soldiers marched 10 miles across Buffalo, picking up food donations along the way and finishing up at Buffalo City Hall where they were greeted by Mayor Byron Brown.

“This mission wasn’t handed down from the top,” Lang said. “A bunch of soldiers got together.”

Lang started this grass-roots movement he calls the Heroes’ March Against Hunger, after Western New York’s infamous October Snowstorm of ‘06.

Local food banks were depleted; so the 105th MP Co. helped by collecting non-perishable food items and delivered them to thousands of Western New Yorkers, who were paralyzed by the Storm

They also checked up on the elderly, assisted in clean-up efforts and removed hazardous trees throughout their Community.

Now, members of the 105th MP Co., led by Lange, voluntarily take steps to make sure what happened in ‘06 never happens in their community again.

The Saturday march was the 5th annual “Heroes’ March Against Hunger.”

“There are a lot of people that have less than what I have.” said Pfc. Alex Gonzalez, a member of the 105th MP Co. and Buffalo resident, who participated in the march for the first time

“This food will provide nourishment and energy so that they can change their predicament: children can perform better in school: get better grades: adults don‘t have to worry as much about where their next meal will come from,” he said.

“The significant and lasting impact of extraordinary awareness-raising endeavors such as the Heroes’ March Against Hunger extends beyond a grateful community, and reminds us of all the good that can be accomplished when we give of ourselves for the benefit of others,” said Governor David A. Paterson in a statement.