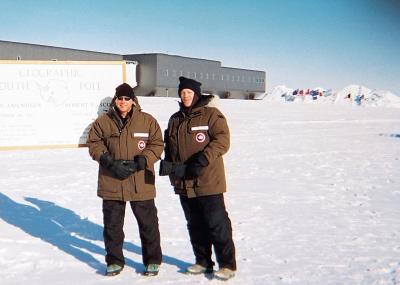 It took three days of traveling for Air Force Chief Master Sgt. Christopher Muncy, command chief of the Air Guard, to reach McMurdo Station, Antarctica, and then on to the Amundsen-Scott South Pole Station, which officials call the “southernmost continually inhabited place on the planet.” Col. Mike McDonald, commander of the Air Guard Readiness Center in Maryland, accompanied him.

“The thing that most impressed me was the mission capability rate that the 109th projects in those austere conditions,” said Muncy. “They have an over 90-percent in-commission rate for their aircraft, and all of their maintenance is done outside in the elements, with no hangers.”

He stepped off the plane and onto the ice cap Dec. 8 and returned Dec. 12.

Chief Master Sgt. Mike Cristiano, command chief for the 109th, said the visit allowed the leaders to see the greater part of ODF and meet the Airmen, civilians and others who support and conduct important scientific research projects there.

The 109th is the on-continent airlift provider for the National Science Foundation’s U.S. Antarctic program. It carries millions of pounds of cargo and fuel as well as thousands of passengers each flying season.

“If something comes across their desks that could assist us in Antarctica, they will [now] have a better understanding of the mission to advocate for us,” Cristiano said.

The wing flies hundreds of missions in and around the frozen continent during the annual, four-month ODF flying operation, which ends in mid-February.

“We have 389 missions scheduled for this season,” said Cristiano. “The men and women of the 109th are doing a spectacular job of trying to keep us on schedule.”

The airlifters land and take off on barren ice and operate under challenging, extremely cold temperatures.

Muncy landed on groomed ski-ways at McMurdo and at the South Pole. There, he got a first-hand look at the operations where the wing’s aircraft routinely fly out to remote science camps to land and take off from unprepared areas.

“Everybody is outside in subarctic temperatures and they probably have a higher in-commission rate than anybody we have stateside,” said Muncy. “They are very proud of what they do.”

Muncy said the wing’s LC-130s -- the world’s largest ski-equipped cargo aircraft -- fly an average of six to seven flights a day to the South Pole and to the outer, remote science stations where only such ski-equipped aircraft can reach.

Cristiano said wing’s Airmen are the Air Force’s veterans of polar airlift operations. They have been flying Antarctic missions since 1988 and took over the operation from the U.S. Navy in 1999. Since 1975, they have also flown similar airlift polar missions on the opposite side of the planet: the Greenland ice cap.