Portrait of 1st Lt. Lou Allen presented to family, school where he taught 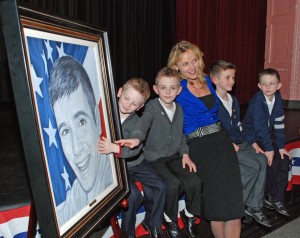 TUXEDO PARK, NY - The vibrant spirit of the late First Lieutenant Louis Allen poured forth in a ceremony at the school where he taught physics and earth science on Friday January 22nd.

Phil Taylor and his wife Lisa of the American Fallen Soldier Project from Texas returned to New York to present a custom portrait to the Allen family and a copy to the school.

Barbara Allen, the Taylors, staff of the George F. Baker High School in Tuxedo Park and friends put together a special program to celebrate the life and accomplishments of the late Guardsman, husband, father, teacher and friend.

“Your dad was a very special person to us,” said Principal Denis Petrilak to the Allen children. Trevor, Collin, Sean and Jeremy were ages 6 to 2 years at the time of their father’s death in June 2005.

Petrilak was among the speakers to almost 200 friends, officials, students and soldiers who once served with Allen at the Newburgh armory.

“He was our best teacher and we miss him very much. Everyday he took good care of all of his students and friends and made us laugh,” he said. “He told us all how very proud he was of each one of you.”

“He was the consummate Citizen Soldier - a National Guardsman, a man that was able to weigh family and country and friends,” said comrade Capt. Steve Raiser, a National Guard lawyer who was with Allen in the Headquarters 42nd Infantry Division.

“He deployed to Iraq for many reasons - for patriotism, to support his friend who was already there and having some trouble. He went to help,” explained Raiser, who like his late friend deployed as a “filler” to the 42nd mid-mission.

“He went over there too for his family.” Raiser went on to explain that Allen calculated a deployment with the 42nd would give him more time later with his young family. “That time he did take from his family - they were never far from his mind,” he added.

Friend and brother in law Rich Jackson added levity and poignancy when he focused on a phrase that appears on Allen’s gravestone in the nearby Orange County Cemetery “Lou Rules.”

“I created a list of ’Lou’s rules’ as a way to come to understand his system of life,” he said.

“The benefits of teaching always outweigh the drawbacks, being a good dad is measured by the love of your children and good behavior, fall in love and let the chips fall where they may, quote every movie like you wrote it, sing every song like you wrote it, treat others like you want to be treated.”

Allen died at age 34 along with his friend and company commander Captain Philip Esposito in an explosion that led to charges against another soldier.

A murder trial was held at Fort Bragg, NC in the fall of 2008 and ended in an acquittal. Allen had served in the Guard since December 1997, assigned originally to Company D, 1st Battalion 101st Cavalry.

The American Fallen Soldiers Project is a non-profit charity honoring the memory of fallen military personnel by presenting families with custom portraits of their late loved ones at no cost.

Taylor has so far completed and presented more than 65 portraits of fallen service personnel across the nation, including five members of the New York Army National Guard. American Airlines serves as a corporate sponsor and transports the portraits and the artist free of charge from Texas to locations around the country for in-person presentations.

For more information go to www.americanfallensoldiers.com