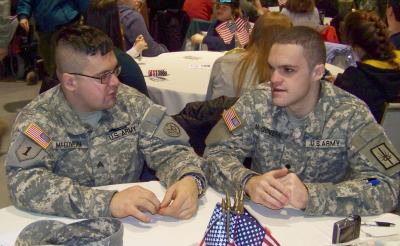 The unit, which included Soldiers from the Buffalo-based 152nd Engineer Support Company, has been preparing for its ten-month mission in Afghanistan for since 2008.

"A little over 18 months ago your lives changed drastically when the unit found out it was gong to war," said Capt. Jeffery Miles, the company commander. "It feels so surreal. Many soldiers put their lives on hold, like the big trip you have to put on hold for another year. These are the unseen sacrifices soldiers make."

The deployment ceremony, hosted by the American Red Cross, gave the Soldiers and their families’ one more chance to be together and be recognized for their sacrifices. Mobilization ceremonies were held in Buffalo and in Walton, Delaware County, for elements of the company on Thursday. Feb. 18.

Brig. General Michael Swezey, commander of the 53rd Troop Command, assured the Soldiers and their families that the New York National Guard would be looking for the families at home as the Soldiers service in Afghanistan.

"The message I came with today is we got your back," Swezey said. "We’ll be standing by taking care of your families."

The 827th, a horizontal construction company that specializes in road construction, will be working to upgrade roads and bridges in Afghanistan during its deployment.

Following the ceremony the Soldiers boarded a charter plane heading for Fort McCoy, Wis. The 827th will train there for approximately 30 days before deploying to Afghanistan for ten months.

For this upcoming deployment to Afghanistan, the 827th will be doing road construction with D7-Dozers, scrapers, graders, and general earthmoving equipment. They are regularly called to assist New York with snow removal and flood support such as their recent State Mission with flooding of Delaware and Sullivan counties June 18, 2007