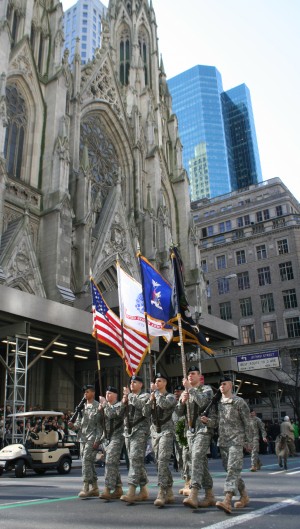 “We have never marched a U.S. and Irish unit together here for the Saint Patrick’s Day parade,” Lt. Col. John Andonie, the battalion commander said at the unit armory. “This is the first time ever.”

The Irish Reservists marched separately from the 69th, which traditionally leads the New York City marchers --estimated to reach almost a quarter of a million this year-but they did join the Guardsman for the traditional post-parade festivities at their Manhattan Armory.

More than 800 Soldiers of the New York Army National Guard’s 69th Infantry Regiment and support elements welcomed reserve members of the Irish 58th Reserve Infantry Battalion for mass at Saint Patrick’s Cathedral and the parade up Fifth Avenue. Thirty-eight soldiers from the 58th Reserve Infantry in County Sligo in Ireland joined their U.S. counterparts in the day-long celebration of Irish American culture.

"This is truly a great honor and privilege for the 58th Reserve Infantry Battalion,” Commandant Gerry Jordan, unit spokesman, told the Irish Examiner newspaper before the trip to New York. “This has been reflected in the number of members taking part, totally at their own expense."

Commandant Fintan Dunne, the Commander of the 58th Battalion, added that this is the first official military unit of the Irish Defence Forces to march in America since the funeral of President John F Kennedy in 1963.

The two military organizations share a common bond in Col. Michael Corcoran, a native of Ballymote, Ireland and commander of the Irish regiment for the Battle of Bull Run in the American Civil War.

New York City Mayor Michael Bloomberg unveiled a monument in Ballymote in 2006 on behalf of the 69th Infantry Regiment and its Irish ties.

The 69th Infantry here in New York City has served as the St. Patrick’s Day parade Honor Guard since 1851. Anti-immigrant emotions in that era often lead to violence, and the troops of Irish heraldry have led the city parade in every year since. The regiment received its nickname as the "Fighting 69th" from Confederate General Robert E. Lee during the Battle of Malvern Hill in 1862 in Virginia.

Returning to New York again this year was Gen. Martin Dempsey, Commander of the U.S. Army Training and Doctrine Command and made an honorary member of the regiment.

While he was being introduced, Dempsey stepped up to the microphone to interrupt Andonie.

“You don’t have to introduce me,” Dempsey declared, “I’m family.”

Dempsey spoke about the importance of military organizations to sustain connections to their past and their community. The 69th Infantry, Dempsey said, is the gold standard for celebrating those relationships.

“You are the unit that I compare others too for a sense of history, a connection to veterans and a connection to community,” Dempsey said. “Continue to grow that reputation of this regiment.”

Dempsey again impressed the gathering of nearly 1,000 Soldiers, veterans, family members and supporters from the New York community with song.

Dempsey led the troops in the chorus of the song “The Fighting 69th” by the Boston musical group the Dropkick Murphys:

“And when the war is said and done, may heaven spare our lives For its only then we can return, to our loved ones and our wives We’ll take them in our arms, me boys, for a long night and a day And we’ll hope that war will come no more, to sweet America.

“So we gave them a hearty cheer, me boys, it was greeted with a smile Singing here’s to the boys who feared no noise, We’re the Fighting Sixty Ninth.”