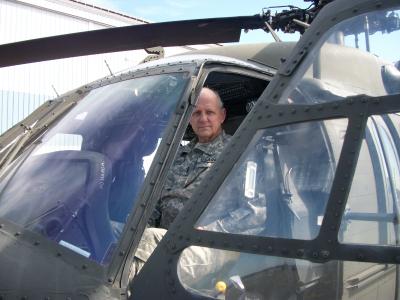 RONKONKOMA, NY-- Chief Warrant Officer Herbert Dargue, an Army pilot since 1967, will fly his last flight with the New York Army National Guard on March 26,2010. Dargue, who has more than 21,000 hours flight time in military and civilian helicopters, will be honored by his unit. Dargue is an expert at flying in New York City’s congested airspace.

Forty-three years and 21,000 flying hours later, Dargue will make his last flight as a military aviator on March 26. He’s capping a career which included a year in Vietnam, another year in Iraq, and service in the Active Army, Army Reserve and New York Army National Guard.

"It’s the end of an era for this flight facility and this unit, said Lt. Col. Mark Slusar, the commander of the 3rd Battalion 142nd Assault Helicopter Battalion, headquartered here. " The lessons and the experience this guy can pass on will be greatly missed."

The unit plans to mark Dargue’s last flight on Friday March 26, --after more than 5,300 hours of military flight time-- with a fire truck salute and the traditional champagne soaking when Dargue steps out of a UH-60 Blackhawk helicopter for the last time.

For Herb Dargue flying was in the blood.

His grandfather, also named Herbert Dargue, became an Army pilot in 1913, received the first Distinguished Flying Cross, and two weeks after the attack on Pearl Harbor he was flying there to assume command of U.S. Army when he died in a plane crash. His father Donald was a B-17 bomber pilot in World War II, was shot down, spent time as a German POW, and then went on to serve in the Strategic Air Command.

Dargue ended up flying Army helicopters because the Air Force wanted him to have a college degree, and back in 1967 the Army didn’t care.

"I went to the recruiter’s office in Patchogue. I walked in the Air Force door and said ’ I want to fly.’ They said ’Do you have a college degree?’"

"I was a young punk, 19 years old; I didn’t want to finish college. I went next door to the Army and they signed me up," he said.

In 1968 Dargue went to Vietnam where he flew Huey’s for six months with the 3rd Squadron, 17th Air Cavalry and then six months with a VIP transport unit. He left Active Duty in 1970 and joined an Army Reserve aviation unit, flying everything from tiny OH-23 observation helicopters to the CH-47 Chinook. At the same time he pursued a career as a civilian pilot, flying traffic report helicopters and charters of all kinds, before winding up in Iran in 1977 training Iranian Army helicopter pilots.

That job lasted for two years until the Islamic revolution. He and the other contractors were evacuated.

"We were in the heat of battle getting out of that place, "Dargue recalled.

Back in the States, Dargue moved back to New York in 1980, went to work for Island Helicopter Corporation, and joined the New York Army National Guard helicopter unit a McArthur Airport here.

Since then, he’s also flown for Thompson Industries and most recently Lehmann Brothers, while continuing to fly helicopters with the New York Army National Guard.

In 2005, he deployed to Iraq as part of the 42nd Combat Aviation Brigade. As an aviation liaison officer he worked in the 42nd Infantry Division Tactical Operations Center in Tikrit, tracking Army flights across an area of Iraq the size of West Virginia.

With the 3-142nd deployed to Iraq in 2008 and 2009, Dargue got an extension on his retirement date because the New York Army National Guard needed experienced helicopter pilots here at home too.

His years of experience flying in New York City’s congested airspace have made him an invaluable asset to every pilot at the Long Island Army Aviation Support Facility, said Slusar, his battalion commander.

"He just gave me my New York City orientation last week, " Slusar said. " He told me what was going to happen before the (control) tower would tell us."

Flying around New York is tricky because there are so many aircraft, and so many airports, he explained. "You have to have exact procedures, otherwise it creates chaos."

Dargue, said Chef Warrant Officer Vic Figliuolo, a standardization pilot with the 3-142nd, is a bit a of a legend in the New York City and Long Island aviation community.

"He is known on a first name basis to all the FBO (fixed base operators) in New York City. Everybody knows Herb," Figliuolo said.

"He’s always been one of those guys who are extremely reliable, never anything short that," he said.

In his years as an Army pilot he’s seen plenty of change, Dargue said. The UH-60 has two engines while the UH-1 had just one.

And Huey navigation was all dead-reckoning and looking out the window and back at the map. Now pilots have scrolling electronic maps that tell them where they are.

And in combat now, helicopters always fly in pairs.

Leaving the Army after so many years is "bittersweet" , Dargue said. He’s loved the flying and the camaraderie but he said he knows it’s time to leave.

"All my peers have gotten out. It has a different atmosphere to it," he said. "The Vietnam vets, they were just a little crazier than the generation nowadays, a little more fun."

"They’re a little more business like now. The atmosphere is not the same," Dargue said