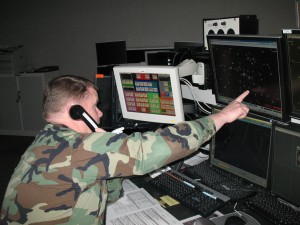 Capt. Chris Crumb, a Weapons Controller at the Eastern Air Defense Sector, simulates controlling a mission. Recently, the Weapons and Tactics shop held the unit’s first-ever semiannual ‘Top Scope’ competition. The competition is designed to help members of the unit achieve one of the overarching goals of the Sector, which is to improve mission effectiveness.

The two Alpha Flight Weapons Directors bested 37 other participants in the competition, which was created to improve the skills of the New York Air National Guard Air Defenders. Their names are engraved on a Top Scope plaque mounted outside the base’s building 700 briefing room.

Eastern Air Defense Sector Weapons and Tactics shop breathed life into the long forgotten competition as a result of a particularly brutal mission de-briefing from a pilot, in which he complained that the air defense controllers were unclear in their directions.

That sparked the idea of a using competition as a vehicle to motivate and elevate the level of weapons control here.

What emerged from the Weapons and Tactics shop was ‘Operation Elevator’ that eventually was developed into the Top Scope competition.

“Our program is a semiannual EADS-only event that currently involves weapons controllers and weapons technicians,” explained Maj. Steve Rathmell, Chief of Weapons and Tactics. “The competition is designed to help us achieve one of our overarching goals of the Sector, which is to improve mission effectiveness.”

The competition was composed of a tough 25 question exam, and those with the highest scores advanced to the execution phase. This consisted of a four verses 12 Defensive Counter Air mission--in which four aircraft must track down and destroy 12-- Distributed Mission Operations, or DMO, mission.

The recorded DMO mission was scored by the Weapons and Tactics team. During the scenario, controllers were challenged with complex picture calls, which means that there were many aircraft in many different types of formations. This is challenging because the controllers needed to be able to maintain situational awareness of the air picture while reacting to the complex picture changes

Semiannual winners will be recognized by EADS leadership and be eligible to compete for the yearly competition. Yearly winners will receive a day pass and a trophy as well as recognition at the Annual Awards Banquet.

As for future competitions here, the Weapons and Tactics team is busy developing scenarios.

“We are in the process of developing a competition for ID [Identification], Surveillance and the Joint Interface Control Center,” said Rathmell. “Their competition will begin in the May/June timeframe.”

Although currently only an EADS initiative, it could grow into a larger competition. The last competition was held at Tyndall Air Force Base, Fla., in 1998, and EADS members outperformed everyone by winning all of the competitions.

“We gave our Top Scope program to the Western Air Defense Sector, Hawaii Region Operations Control Center, Alaskan NORAD Region, and the Canadian NORAD Region in an effort to reenergize the old sector-verses-sector competition,” Rathmell explained. “Response from all of the sectors has been positive, but we will have to wait and see if a larger competition emerges.”