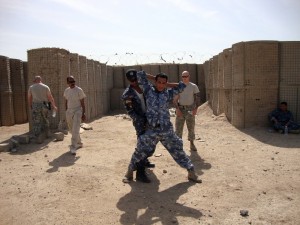 BASRA, Iraq (5/3/10) -- After receiving a week of intense training at the Basra Operations Center from the New York National Guard’s 206th Military Police Company, attached to the 17th Fires Brigade, members of the Iraqi Emergency Response Battalion are are better-prepared to handle large-scale emergencies.

"After discussing different strategies for handling large-scale emergencies with the Iraqis, we found that they had a good grasp of response procedures," said Steve Sperber, a U.S. State Department contractor and international police advisor.

The training consisted of classroom scenarios, practical exercises and a tactical pistol course.

"We all had different vantage points of each scenario, which allowed us to thoroughly evaluate their techniques," said Cpl. Brian Walker, 206th MP Company, emergency responder and native of Loveland, Colo.

During the classroom sessions, Sperber and the platoon leaders met with the ERB personnel to evaluate the scenarios and map out the courses of action using a terrain model.

The New York National Guard unit is made of members of city and state police and sheriff departments from across the state.

"The Iraqis are being trained through the eyes of police officers, so they’re gaining years of experience and knowledge that only come from first-hand experience," said Manion.

"Our goal was to instill the same sense of pride and professionalism in our Iraqi partners as we have in ourselves," Theobald said. "They picked up the training quickly, but what was most impressive was their eagerness to learn."