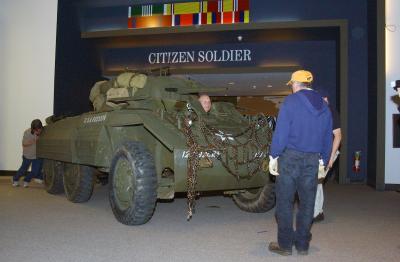 ALBANY -- The history of the New York Army National Guard from the Spanish American War to Iraq and Afghanistan will be featured in a New York State Museum exhibit that opens May 28.

Wall panels, dioramas, photos, uniforms, equipment and weapons displays are being completed. The exhibit will also feature personal stories of Soldiers -- past and present -- including women Soldiers serving in the modern Guard’s ranks.

“This is something we really wanted to do and felt this was the time,” said Dr. Clifford A. Siegfried, the museum’s director. His son is a Naval Reserve officer and Iraq veteran.

“The scope of this display and the role the Guard plays for our communities, state and nation made it easy for the staff to really get behind it. So many of us feel connected,” he said.

A restored World War II M8 “Greyhound” Armored Car was moved into position in front of the Citizen Soldier Gallery on Wednesday, May 19 as delighted visitors including fourth grade elementary school students from Jeffersonville, Sullivan County looked on.

The vehicle is just one of many display items that will be used to tell the story of New York’s Citizen Soldiers who served at home and abroad during some of the nation’s darkest times. New York Soldiers of the 101st Cavalry Group used M8s in Europe during World War II.

“This is one of the largest exhibits ever produced here,” said Pat Jordan, the museum’s Director of Community Relations. “This will be here through March 2011,” she added. “We are also developing a series of special events and programs including documentary screenings, book signings and other events that are being scheduled during the exhibit’s run.”

The New York State Museum is the nation’s largest and oldest state museum and hosts innovative exhibitions and programs year round. More than 700,000 visitors annually come through its galleries to see both permanent and temporary exhibits including the “World Trade Center: Rescue, Recovery, Response,” “Adirondack Wilderness,” and “Native Peoples of New York.”

Expert curators, historians, designers and other professionals design and produce the exhibits on site from photos and artifacts in New York’s archives and historic collections as well as using selected items on loan from private sources, like the armored car and other items from Gregory Wolanin from Albany.

The museum is open daily from 9:30 a.m. to 5 p.m. and closed on Thanksgiving, Christmas and New years Day. For more information, visit the New York State Museum website at www.nysm.nysed.gov