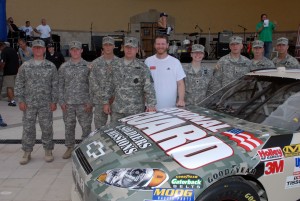 DAYTONA BEACH, Fla. -- As most NASCAR paint schemes are used as advertising platforms, Dale Earnhardt Jr.’s partnership with the National Guard gives him a unique opportunity to dedicate his paint scheme for NASCAR’s July 3 race to eight National Guard Soldiers and eight missions in which they served.

The "8 Soldiers, 8 missions" paint scheme was unveiled by Earnhardt and the eight Soldiers June 30 at an event in Daytona Beach that honored their sacrifice and selfless service for others, by serving in domestic and oversea missions for their country.

"We take a lot of pride representing these eight soldiers and the entire [National] Guard, and their sacrifices," Earnhardt said.

Earnhardt entrusted the design of the paint scheme to a friend and said he was clueless as to what it would look like until it was unveiled.

"It is a good looking car. I was excited," Earnhardt said. "It was great to have eight Soldiers here and listen to their eight missions. It gave me a lot of pride that I have for the Guard."

Brubaker, the National Guard Soldier of the Year, felt honored to be one of the select few.

"It is a humbling experience to be here," Brubaker explained. "They have all of these unique stories. It feels great to be showed case."

He gives credit to his success to more than just his personal desire.

"The family support I have with my wife Heidi has been a great influence. She has been very supportive," Brubaker said. "I had a lot of help from my unit and peers along the way. I was happy to be able to give my unit recognition, since they are the reason I am here."

Foster, who treated casualties under enemy fire and went on 100 missions while in Afghanistan, is counting down until race day.

"I am really excited to be here," Foster said. "It is my first race."

As Earnhardt gets to know the Soldiers and the National Guard, he said he gets more comfortable, making it a better relationship.

"It is really emotional, and I feed off of that emotion," Earnhardt said. "It is in the back of my mind throughout the event."

Earnhardt said that he enjoys events like these because it allows people to recognize the reality of the sacrifice by National Guardsmen.

"We appreciate what they do for us," Earnhardt said. "We are really fortunate."