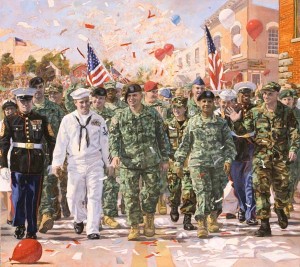 SARATOGA SPRINGS, NY -- A Saratoga Springs artist and her latest work are getting the home-town-treatment during a reception on Friday, July 30 at the New York State Military Museum and Veterans Research Center. But to Rumara Jewett, it’s her subjects who deserve the attention.

“Nowadays, there is a general recognition that the community needs to support soldiers as individuals,” wrote Jewett about her reasons for starting and completing the project, which pays tribute to members of all of the nation’s service branches. “All around are cars and lawns decorated with ‘Support our Troops’ yellow ribbons,” she said.

“Coming Home” depicts a homecoming parade for local members of the various military services and is currently on display at the museum through the summer. According to Jewett, the painting is meant to represent any service members from any community in an ideal homecoming celebration. The subjects in her work include area members of the New York Army and Air National Guard as well as members of the U.S. Navy and Marine Corps. It is 72 by 80 inches, oil on canvas in a vibrant display of color and local pride.

“...this project had a big emotional draw for me,” she explained, referring to the Soldiers, Sailors, Airman and Marine who modeled for her. She said it was a privilege for her to work with real service members instead of just models in rented uniforms. “Also, I had been studying portraiture for several years and the chance to work with a variety of faces with their unique emotions reflecting what it would feel like to be in the situation portrayed, was a big attraction.”

It started out as a commissioned work with a private client and Jewett developed a concept built around a military homecoming. As a working commercial artist, she approached the project first by researching her subject and then making a plan. This was her first military subject. Through personal contacts and outreach she identified some area military members who were willing to serve as models. She also drew upon her own memories of family members who served in the military. Although the commission fell through, she was determined to complete the work she started.

Jewett explained that she felt the energy of the project was much larger than her. “It seemed important to do the work because of what it represents, namely the proper closure to the deployment experience of military service and respect, love and support for the individuals who are deployed. This project represented what art can do,” she said -- “to crystallize and reflect back an attitude prevalent in the general society.”

“Coming Home” was completed in the spring and was first exhibited in a public library in her parent’s home town of Lincoln, MA. She put more time into this project than any other, and according to Jewett, the public reaction to “Coming Home” is very different than her previous efforts.

“The responses to the painting have been phenomenal and really much stronger that anything I’ve experienced in the past,” she said. “I’ve seen the strength of emotion on people’s faces when they first see it,” she said, noting that moist eyes, broken speech and hushed tones were common reactions. She has also received an “outpouring” of compliments. In addition to all the feedback, she feels that “Coming Home” demonstrates her abilities to capture emotion and energy in a unique and special way. “It shows that I can portray accurately a complicated world that I don’t know well, down to the fine details,” she said. “Painting this was very uplifting,” she added.

For additional information on the artist and “Coming Home” go to the artist’s website at www.rumara.com