Comedy Central Star gets a courtesy ride from Latham-based MPs 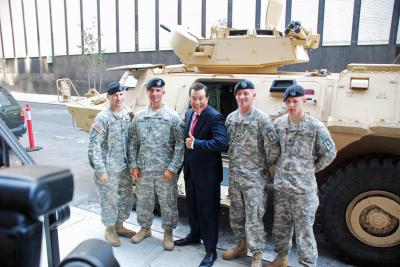 New York--New York Army National Guard Soldiers pose with comedian Stephen Colbert on Wednesday, Sept. 8 at the studios of Comedy Central in Manhattan. They are (from left) Capt. Shawn Tabankin, Staff Sgt. Kent Theobald, Sgt. Josuha Flint, and Spec. Jeffrey Vucich. Theobald, Flint, and Vucich appeared with Colbert in a segement which opened his Sept. 8 program which saluted troops who served in Iraq.

New York--“Hey you can’t park that here,” yelled a voice from an upper floor of the New York City studio on West 54th Street. “You want to tow it?” replied one of the Soldiers from the street, knowing he wasn’t just speaking with a comedian, but also the host of one of America’s hottest shows.

They took him up to the front door of his studio while the cameras rolled. The taped sequence was the introduction for his evening broadcast and his Guard crew was enjoying the ride even more than he did.

The three Latham-based Guardsmen were the opening act in a special edition of Comedy Central’s "The Colbert Report" that aired on the cable channel that same evening.

The soldiers had returned in June from a 10-month deployment to Iraq and were just the kind of cast members that The Colbert Report was looking for -- Soldiers from New York who had served in Iraq.

“This is great,” said Sgt. Joshua Flint from Cherry Valley. “He’s even going to use one of my jokes,” he boasted. “What a great guy,” said Staff Sgt. Kent Theobald from Fort Johnson. “He’s obviously a big supporter and the whole staff here has been wonderful.”

They came to New York City to take part in a show that included include Vice President Joseph Biden and Gen. Raymond Odierno and a studio audience of over 150 military personnel.

The Colbert Show is Comedy Central’s most watched program and the format is of a “fake” news show that parodies main stream media.

In this episode, The Colbert Report delivered a comic salute to American service personnel who served in Iraq and was tied to coverage of the recent withdrawal of combat forces from there.

At the show’s request and with Army approval, one of the 206th’s armored cars was brought down to Staten Island by flat bed trailer from the Guard’s Mobilization and Training Equipment Site at Fort Drum.

The crew then drove the vehicle over the Verrazano Narrows Bridge, up the Brooklyn Queens Expressway and into Manhattan through the Battery Tunnel. They had a police escort and even the ride over was a thrill for the crew and escort staff.

“It was a blast,” said Specialist Jeffrey Vucich from Rhinebeck, NY, who rode in the turret. “Going over the bridge was amazing and people kept hitting their horns, waving and giving us the thumbs up,” he said.

The “Guardian” has been used by Military Police units in Iraq to escort convoys and protect check points. This time it was being used as a TV show prop and got a lot of approving public attention while on the road and as it sat parked in front of the Colbert Show studio.

Curious pedestrians, production staff as well as security personnel enjoyed taking photos and speaking with the crew following the taping session outside and prior to the studio portion of the program that followed.

Another 10 members of the New York Army National Guard from the Westchester County-based 53rd Troop Command and New York City’s 1st Battalion 69th Infantry later joined the 206th members in the studio as an audience comprised exclusively of Iraq veterans and including the most recent former commander there, Odierno.

Capt. Shawn Tabankin, an operations officer for the 53rd Troop Command, also appeared on the program; as the Soldier who won the chance to use Mr. Colbert’s luxury toilet.

Titled Been There, Won That: The Returnification of the American-Do Troopscape!, the episode is a comic tribute said to originate with the host himself, whose visit to Iraq last year to both entertain and report on the troops brought cheers from both service members and viewers.

It was the Colbert Show which wanted to feature local Soldiers and veterans.

The 206th Military Police Company deployed 180 Soldiers to Iraq in September of 2009 and provided security during the Iraqi elections in March while also training and mentoring Iraqi police.

While the unit is headquartered in Latham, its members come from across the state and include many civilian law enforcement professionals in its ranks. Approximately a fourth of the unit’s members had completed a previous deployment.