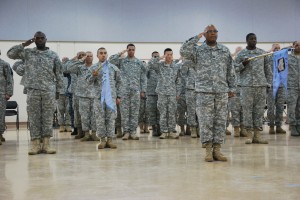 “I am immensely proud to have been given the opportunity to stand next to you all,” said Dreisbach. “Through out my time here with [JTF-ES] I was never in doubt because each of us was doing our part to always be ready for the fight.”

Maj. Riley served as the Deputy G1 with the 42nd ID in Tikrit, Iraq, and was a former Headquarters Detachment Commander of Camp Smith Training Site. His awards include the Bronze Star Medal, the Meritorious Service Medal, the Iraqi Campaign Medal, and the NYS Defense of Liberty Medal (w/ World Trade Center 9/11 service device)

“I’ll tell you that this is a great crew [that has been built],” said New York National Guard Director of the Joint Staff Brig. Gen. Renwick Payne. “The families have also been a continued excellent support of Empire Shield as well.”

Maj. Riley is currently on a leave of absence with his Civilian job with the ADP Retirement Services in Florham Park, N.J. He lives with his wife Maryanne, a special education teacher, and his son Conner and Daughter Quinn.

“Together we can be vigilant and protect this country we love so much, I look forward to working with all of [these servicemembers],” said Riley.