April 18, 2021 | 2:30 pm COVID-19 Updates
COVID-19 is still spreading, even as the vaccine is here. Wear a mask, social distance and stay up to date on New York State's vaccination program.
Get the Facts 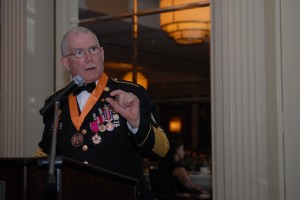 CSM Robert Van Pelt speaks during his retirement dinner on May 7 at the Saratoga Springs Hilton Hotel.

"Soon my military service will end," Van Pelt said at an emotional transfer-of-responsibility ceremony held here May 6. "But my service to the military will go on forever."

Van Pelt, who served more than a decade as the state command sergeant major, said he plans to work on soldiers’ behalf via the numerous veteran and military service organizations he’s involved in.

In addition to being dedicated, honest, ethical and hardworking, Van Pelt is committed to the state and the nation, said Maj. Gen. Patrick Murphy, Adjutant General for the State of New York.

"You have been an awesome soldier," Murphy said of Van Pelt. "You are an American soldier. I could not have asked for a better partner to start out my tenure in this position."

Van Pelt is being replaced by Command Sgt. Major Frank Wicks, who assumed his duties on May 9.

Van Pelt’s service began in 1969, when he was drafted into the Army. During Basic Training he re-enlisted so he could choose a military skill and joined the Signal Corps. He served in Vietnam and Italy before leaving Active Duty in 1971.

"If somebody would’ve told me that, in 1971, when I got off the plane from Vietnam in Fort Dix, that I’d be doing this 41, 42 years later, I would’ve had them committed," Van Pelt joked after the ceremony.

Through his Army service, he’s visited all 50 states, two territories and 17 foreign countries.

"I think the Army did more for me than I did for the Army," he said. "It gave me an opportunity to expand my horizons."

Though sometimes choked up during his farewell speech, Van Pelt joked his way through as he recounted the events of his career. The terrorist attacks of 9-11 "shook us to our core," Van Pelt said, after asking the audience of soldiers, civilians and others to observe a moment of silence for fallen service members.

"Never in my life did I think I would be sending soldiers downrange to fight a war," Van Pelt said, "I will tell you as a Vietnam veteran, I am so proud of the way in which we now recognize our veterans and their families. America has gotten it right, and though some may not agree with the war, our soldiers are treated with respect. I have always said, you don’t have to glorify the war, but glorify the warrior."

Wicks is the fifth state command sergeant major, Van Pelt noted, and he has complete faith that he’ll build on his predecessors’ programs and deliver the outstanding NCO leadership soldiers deserve.

"Frank, you’re making it easy for me to leave," Van Pelt said to Wicks in his farewell speech. "I’ve come to know, respect and appreciate your values."

Video of this event can be found here.