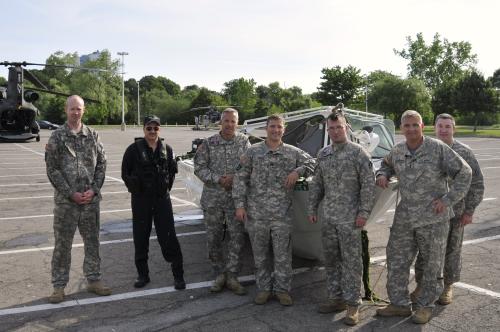 But early Father’s Day morning, the six foot, four inch tall, Hamlin, N.Y. resident was hanging upside down out of a CH-47 helicopter with his head two feet above the raging Niagara River, just 1,000 feet upstream from the Canadian side of Niagara Falls, trying to get a hook on a stuck motorboat.

Lentz’s Father’s Day flight got its genesis more than 24 hours earlier when four teenagers went boating in the Niagara River. Their motor failed and they were swept downstream towards Horseshoe Falls (the name of the Canadian side of Niagara Falls) where the boat grounded. New York State Park Police were able to rescue the teens.

But after retrieving the teens’ vessel the Park Police boat ran aground too. The two-man crew was airlifted off by a Canadian helicopter, but the boat was stuck just above the falls.

New York State Office of Parks and Recreation officials worried that the boat would be swept over the falls, damaging the natural wonder and interfering with navigation. A private salvage company wanted more than $100,000 to retrieve the steel-hulled motor boat, so state officials turned to the New York Army National Guard.

Fritz, a Webster, N.Y. resident who grew up Amherst, N.Y. was in his old hometown that Saturday for a social engagement. He immediately drove out to Goat Island, the New York State Park that straddles Niagara Falls, for a look at the problem.

When he got there Fritz called Lentz, a veteran flight engineer for the unit, and the two began planning the mission.

Their challenge was to get a helicopter above the stuck boat and get a hook onto hoisting points installed on the bow and stern of the Park Police vessel. Then they would either tow or lift the boat onto Goat Island.

Once the two decided the mission was doable, Fritz called Burke, who got final approval from the Adjutant General, Maj. Gen. Patrick Murphy.

It was a good mission, said Brig. Gen. Renwick Payne, the New York National Guard’s Director of Joint Staff. The Guard could save New York money and help another state agency while getting valuable training for its aviation Soldiers, he explained.

The mission had to be done early when water flow over the falls is reduced. During the night water is diverted from the river into hydroelectric reservoirs and canals on both sides of the falls.

The team arrived at Goat Island just before 7 a.m. and after dropping off Postle-to watch the maneuver from the ground-they went into action.

Fritz and Zimmerman flew the helicopter just above the stuck boat and then went into a hover.

That was more challenging than usual because the water rushing below him at 25 miles per hour made it look like the helicopter was constantly moving, Fritz said. He was so close to the river that the rear wheels went into the water at times, and he and Zimmerman had to turn on the windshield wipers to deal with the spray.

Meanwhile, Lentz, strapped into a body harness with Bagrowski hanging onto him to make sure he didn’t get tangled up, was hanging halfway out the hatch in the floor of the CH-47 troop cabin, trying to get a sling hook onto the small hook at the rear of the stuck Park Police boat.

“What I was trying to hook up to was a pretty small target and I had to hang out pretty far so we could get to the boat’s hook,” Lentz said.

Lentz hung there, getting wetter and wetter, talking over the intercom to Fritz at the controls: telling him where to maneuver the massive 23,400 pound helicopter, so he could make the hook-up.

“I was soaked from my head to my waist,” Lentz said. “Everything that was hanging out of the hole was soaked. Water was constantly spraying up in my face.”

His face mask kept most of the water out, but he still had to drain the lenses in the mask every so often, Lentz recalled.

After about 45 minutes of failing to hook onto the stern of the boat, Fitz made the call to go for the larger bow hook instead.

“The forward sling point was a little bit bigger target and it was a lot higher off the water,” Lentz said.

He got the hook on the boat, got back inside, and Fitz and Zimmerman at the controls started lifting.

He’d been afraid that the boat-which was filled with water-would be heavy and hard to lift, Fitz said. But the water ran out until the boat weighed only about 8,000 pounds, much less than the 26,000 pounds the Chinook is designed to lift.

The next trick was to fly forward just enough so that the stuck boat’s anchor pulled out easily, Fitz said.

They got the boat onshore, dropped it, landed, picked up Postel and headed home to enjoy the rest of their Father’s Day.

The Soldiers of the 3-126th have flown troops and supplies into combat outposts in Afghanistan, dropped armored personnel carriers into Fort Drum impact area to serve as targets, and carried sandbags during post-Hurricane Katrina operations.

“But this has kind of been the strangest mission we’ve ever flown,” Fitz said.