27th Infantry Brigade Combat Team Stays Ahead of the Game 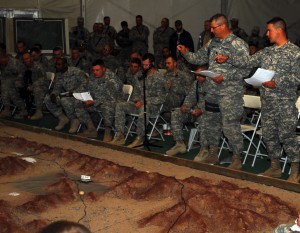 NATIONAL TRAINING CENTER, FORT IRWIN, Calif. -- Composed of the same materials as the rocky, desert terrain it depicts, the 27th Infantry Brigade Combat Team’s massive sand table has allowed its leaders to better understand the areas they’ll be dealing with while training here.

"We definitely set a new standard for sand tables and the briefing process," said Sgt. Maj. Jason Zeller, the operations sergeant major of the New York Army National Guard brigade, which began arriving here in late September to train in preparation for the unit’s mobilization and deployment to Afghanistan in early 2012.

About 1,500 brigade Soldiers are currently scheduled to deploy to Afghanistan, and the training here includes simulated combat missions and stability operations under the realistic, demanding and stressful environment provided by the National Training Center (NTC).

The exercise will be controlled by an expert and experienced Operations Group, and Soldiers will confront a highly capable opposing force in an exercise area which mirrors the physical and cultural conditions of Afghanistan.

Before the brigade began tactical road marches into the exercise area on Oct. 6, brigade leaders gathered around the sand table and used it to rehearse their schemes of maneuver, streamline their plans, coordinate their actions with other units and refine a myriad of other details. More than a dozen brigade Soldiers helped build the sand table, which mirrors the rugged, desert and mountainous countryside the brigade will be operating in.

"Those are all accurate depictions of the mountains, to scale," said Sgt. First Class Vince Tomasella, who led the sand table’s design and construction. The sand table also shows the road network, cities, villages, brigade units, other units and the forward operating bases (FOBs) and combat operating bases (COBs) the units will occupy after moving into the exercise area, he added.

Tomasella, a Rochester, N.Y. resident who is the non-commissioned officer-in-charge of the brigade’s engineer cell, said the sand table also allows Brigade Commander Col. Geoffrey Slack to explain his intent and vision for full-spectrum operations, and gives leaders a line-of-sight understanding of what’s visible from any location, see vulnerable points and fine tune their plans for troop positions.

"A picture says a thousand words," Tomasella said of the sand table. "I think it’s pretty impressive. For the brigade commander to be able to walk through the entire area of operations is kind of monumental."

As was the sand table’s construction, which began on Oct. 3. Tomasella, Sgt. Luke Zuercher, of Mattydale, N.Y. and Spc. Ryan Blount of Medina, N.Y. and used a specialized computer system to coalesce satellite pictures and topographic maps into a 1 by 7000 scale map to base the sand table on. As far as he knows, no one has ever created a map that scale, Tomasella said.

While two brigade combat engineers built the sand table’s wooden frame, about 17 Soldiers of the brigade’s Headquarters and Headquarters Company collected and moved an estimated two tons of Fort Irwin rock and sand into the tent, Tomasella said. The sand table didn’t seem that large until they started building it, he added.

Using waterproof bags, entrenching tools and their hands, Tomasella, Zuercher and Blount began shifting and shaping the sand and rocks to resemble the terrain on their map. They conferred often during this process, trading notes and consulting the map to decide on the final shape of ridges, spurs and other terrain features on the sand table.

Once the sand table was completed, Blount took part in the Oct. 6 rehearsal, stepping over the miniature mountains and ridges on the sand table as he moved pieces representing units to various spots to show their planned maneuvers in the exercise area.

Tomasella has built many sand tables during his two-decade Army career. Zuercher and Blount are honor graduates of the Army’s six-month geo-spatial engineering school, and analyze topography for brigade leadership.

"My knowledge of and sand tables and their knowledge of maps helped pull the whole thing together," Tomasella said.

Zuercher was surprised when they were told to start laying out the sand table, but Blount wasn’t.

"If you’re going to do something like this, why not pick the guys who’ve been staring at the images and maps?" Blount said.

Their faces lighted up when asked if they’re proud of the sand table. It seemed like an impossible task at first, Zuercher said.

"It feels good to accomplish something you weren’t sure you could do," he said.

Tomasella held them to a high standard, Zuercher said. The three also thanked and praised the other Soldiers who took part in the sand table’s construction.

"We couldn’t have accomplished it without their help," Zuercher stressed.

Over the years he’s developed kind of a love-hate relationship with sand tables, Tomasella said. Though the construction process is enjoyable, you know the sand table will be destroyed as soon as a unit is through using it, he explained.

He’s proud of this sand table nonetheless, and enjoys it when people look at it in amazement, Tomasella said.

"People have been coming through the door and saying ’oh my God,’ and ’unbelievable,’" he recalled.

Blount noticed that as well.

"I think half the brigade has come through to see the thing," he said.