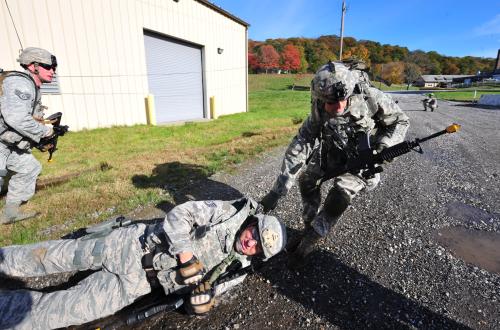 U.S. Air Force Airman Sergio Maturana, 105th Security Forces Squadron fire team member, drags Staff Sgt. Erik Kristensen, 823rd Base Defense Squadron fire team leader, out of the danger zone after being shot during a foot patrol exercise at Camp Smith, N.Y. Oct 28, 2011. The training and exercise were as realistic as possible to allow Airmen to prepare for future deployments. The 823rd BDS brought everything they needed as if they were going to a bare base. (U.S. Air Force photo by Staff Sgt. Stephanie Mancha/Released)

CAMP SMITH TRAINING SITE, N.Y. -- Two sister squadrons who share a mission to "protect, defend and fight" joined together at Camp Smith, N.Y., for 10 days of intense training that culminated in a field training exercise (FTX).

The partnership between the 823rd Base Defense Squadron from Moody Air Force Base, Ga., and 105th Security Forces Squadron from Stewart Air National Guard Base, N.Y., relies on standardize training because the two units are integrated as one fighting force when they deploy together.

"This training is extremely beneficial to everyone; integration is the key focus of both units," said U.S. Air Force Senior Airman Christopher Pate, 823rd BDS unit deployment manager. "We are solidifying the relationship we have with the 105th SFS."

The 10 days of training at Camp Smith included everything from explosive ordnance training, and urban operations training (fighting within buildings) to combat life-saving skills.

"We are combining the knowledge of both units and working together," said Staff Sgt. Kevin Schulte, 823rd BDS fire team leader. "We are learning things such as tactical movements, firing and how to identify enemy tactics."

Several of the troops who participated in the training were new Airmen who can apply the training to future deployments.

"The new Airmen are learning a lot and hearing firsthand stories from guys who have already deployed. They receive fresh knowledge from situations those guys have been in," said Master Sgt. Frank Berlanga, 105th SFS fourth squad training leader. "That’s something you can’t teach in a classroom."

The two squadrons were integrated during all aspects of training and were separated into five squads with 12 to 15 people per squad.

The whole process was established to make it feel like a real deployment from the mobilization line at Moody to the Meals Ready to Eat they were served for lunch every day. "The training is supposed to be as realistic as possible," said Tech. Sgt. Marvin Collier, 823rd BDS unit deployment manager. "We brought everything we would need as if we were going to a bare base, from equipment to food. The training allows us to prepare for future deployments."

The skills the Airmen learned during the first few days prepared them for the FTX. These skills included things such as learning how to clear buildings and combatives training.

The FTX was set up to be realistic and incorporated several scenarios, one of the scenarios included an attack on the Humvees during a mounted patrol, where the squads had to practice their tactical combat casualty care skills and prepare their injured troop for medical evacuation via helicopter.

"Lifelike scenarios are a valuable tool. They receive classroom training but hands-on training is important," said Tech. Sgt. Andrea Jefferson, 823rd independent duty medical technician. "What they learn in the classroom they are able to implement as needed."

The skills learned during the training and FTX were invaluable to everyone participating. From the new Airmen who have never deployed, to the more experienced ones, the training ensures that both units are synonymous and they can interchange when it is time to deploy.