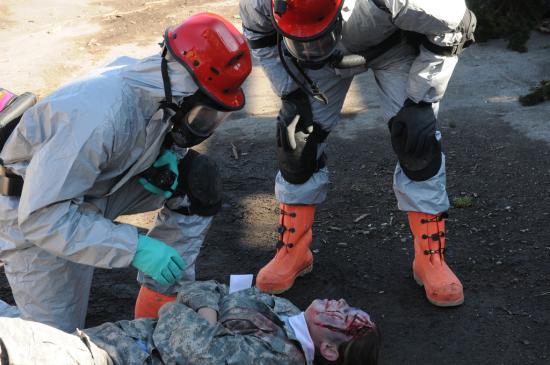 KINGSTON, NY -- Sirens on emergency vehicles flashed through the air as more than 600 New York Army and Air National Guard and civilian first responders reacted to a terrorism response drill in the downtown Kingston area November 5, 2011.

With the exercise taking place in downtown Kingston, local residents observed as military and civilian forces reacted, in stages, to a simulated dirty bomb detonation.

When sent in, the search and extraction team suit up and begin examining the site and the casualties.

“The search and extraction team breaches the area and assesses the number and injuries of the casualties,” Capt. Jennifer Sheringham a WMD (weapons of mass destruction) plans and operations officer said. “They are the first ones notified of a chemical presence from the civilian first responders.”

As the search and extraction team brings simulated casualties to the decontamination site, the next stage begins.

Fully suited during the decontamination phase, the teams send casualties through a series of tents where they are rinsed and retested for signs of chemical or radioactive activity.

Working together in an urban environment for the first time, the CERFP and the civil support team practiced a real world situation to better prepare for an unexpected disaster.

“Our goal today is to look at our response time, see how we are working as a group and pinpoint our deficiencies,” Sheringham said. “We try to make it as realistic as possible so that if something does happen we know we’ll be ready.”

Operating in a high stress environment does not come without difficulty.

“Personnel are a struggle because we have some people that really know what they are doing, and then some that are doing this type of training for the first time and that makes it hard,” Sgt. Ruffy Galsim, the non-commissioned officer in charge for non-ambulatory decontamination said. “Our unit does this training at least every two month in order to keep up with new Soldiers coming into the unit.”

Working in an urban environment, space is not negotiable. “Every scenario is different,” Galsim said. “In a small area like this we have to be able to coordinate ourselves with the space that we are given.

Cooperation between civil and military forces is essential for training but does not come without certain challenges.

“There are always obstacles but the hardest part is getting together and getting it right,” said Major Fred McCoy, executive officer, 104th Military Police Battalion. “The Soldier’s, airmen, and civilian forces really came together and integrated well.”

Closing down a major part of downtown Kingston for a training exercise and the amount of coordination in working with so many different support teams in no way outweighs the importance of the exercise itself.

“In a natural disaster this is what would happen,” McCoy said. “We would in such a case integrate with civilian forces so this integration is reality.”