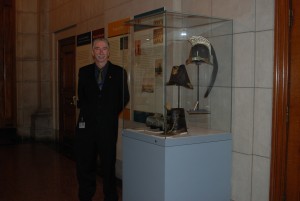 ALBANY-- New York State Military Museum employee Wayne Clark stands beside a display of 19th Century military headgear worn by members of the New York Militia. The display, on the history of the New York Militia and National Guard, was unveiled as part of Gov. Andrew M. Cuomo’s opening new historic exhibits at the State Capitol to on Jan. 4, 2012 as part of the events surrounding his State-of-The-State message.

The Soldiers were among the 50 members of the New York Army and Air National Guard responders to Hurricane Irene and Tropical Storm Lee, joining firefighters, police and other first responders.

The event was televised live across the state.

The New York National Guard Soldiers and Airmen were among 277 first responders invited by Cuomo to sit in the audience during his speech.

In his opening remarks the governor invited his guests to stand as he praised them for their efforts in responding to first Hurricane Irene and then Tropical Storm Lee in August and September 2011.

"Last summer, Hurricane Irene and Tropical Storm Lee devastated communities all over the state -- communities that could least afford it. We are still reeling from the damage today," the governor said.

"But in our darkest hours, New York shined the brightest, and the storm clouds had a silver lining: the way New Yorkers responded. People all across the state came together in a beautiful display of community. And our first responders were selfless. They were professional. And they were courageous. They are what public service is all about," Cuomo said.

At that point he asked the Guard Soldiers and Airmen, along with members of the New York State Police, the New York Park Police, The Department of Environmental Conservation Police, local police and sheriff’s departments, volunteer firefighters, and state agency representatives to stand and be recognized.

Images of the Guardsmen and other first responders were broadcast across New York.

More than 4,000 members of the Army and Air National Guard were placed on duty at some point during the three week period in August and September in which New York responded to the back-to-back disasters. Rains from Hurricane Irene caused massive flooding in the Catskill Mountains and the Adirondacks, and then Tropical Storm Lee hit, causing high water levels that flooded the Binghamton- area. "It was an honor to represent the National Guard at the governor’s event," said Spc. Kara Sharkey, a member of Joint Forces Headquarters. "It’s great that the governor recognized the work we did during the storm.

"We’re honored that Governor Cuomo took the time in his speech to recognize the New York National Guard among the other first responders," said Maj. Gen. Patrick Murphy, the Adjutant General of New York. "This was a big moment for the Guardsmen and women who represented the thousands who responded to Hurricane Irene and Tropical Storm Lee."

"It was a great honor having Governor Cuomo give recognition to all the first responders that came to the aid of Irene flooding victims during the State of the State Address," said Lt. Col. Albert Thiem, a member of the 42nd Infantry Division who helped rescue local citizens in the Catskills.

"We felt his sincerity and very much appreciated the standing ovation," Thiem said.

The Guard’s contribution to the hurricane response was also noted in an exhibit of equipment used by state agencies in the Concourse of the Empire State Plaza, the massive government center here.

An Army National Guard humvee, like those used during the storm response, and one of two New York National Guard Guard Mobile Emergency Response Communications (MERC) systems were on display alongside emergency gear used by other state agencies. The MERC is a satellite system that provides internet connections and voice over the internet phone service. During the response one was used to provide emergency communications in Schoharie County.

The New York State Division of Military and Naval Affair’s Military History Museum was also part of the governor’s events on State-of-the-State Day.

To mark the completion of an 11-year State Capitol restoration project, the governor unveiled a number of historical exhibits in the building. Among these was an exhibit on the history of the New York National Guard and Militia in the Flag Room of the Capitol.

The room got its name because of the historic civil war flags which have been stored there since the 19th century.

"It was an honor to be part of the governor’s effort to revitalize the Capitol," said Military Museum Manager Michael Aikey.