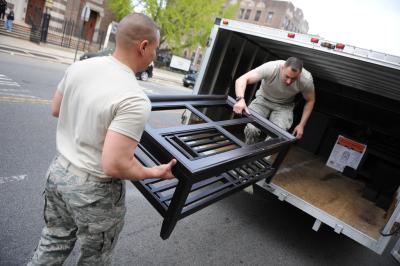 NEW YORK, NY -- Security Forces Airmen from the 106th Rescue Wing traveled to New York City to provide support to the Wounded Warrior Project on April 16, 2012. The Wounded Warrior Project alerted their volunteer network looking for help for Angelo Bencivenga. Bencivenga, a previously homeless Iraq War Veteran, lost the use of his legs while supporting Operation Enduring Freedom. Bencivenga earned a Bronze Star, three Purple Hearts and an Iraq Campaign Medal during his time overseas. The Wounded Warrior Project found Bencivenga an apartment in the city, but there was a need for furnishings to meet Bencivenga’s unique needs. Major Celestino J. Martinez, Commander of the 106th SFS put forth the request to his Defenders, many of whom who have served in Iraq and Afghanistan. These Airmen took a collection of donated furniture from within their Squadron and met the Wounded Warrior staff directly to donate the items. "I am so proud of these Airmen,” Major Martinez states, “who without hesitation did not fail to recognize the importance of the bonds that are forged and shared with all of our nation’s warriors. They saw a wounded warrior in need and responded--a day that won’t be forgotten by them and everyone else who was there, especially the warrior in need of assistance." Representatives from the 106 SFS included Master Sergeant Dominic DeLorenzo, Master Sergeant Charles Knapp, Staff Sergeant Brian Hammel and Staff Sergeant Keith Mangels, in addition to the Wounded Warrior Project personnel who assisted with moving Bencivenga in. The Wounded Warrior Project is a nonprofit organization whose main objective is to "honor and empower wounded warriors" of the various military branches, and aims to raise awareness and the public’s support for the needs of those service members.