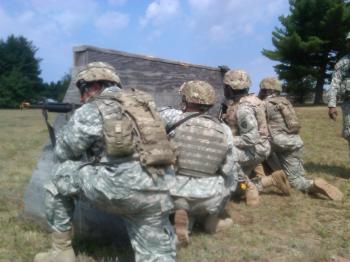 Since arriving on July 13, the members of the 101st Expeditionary Signal Battalion (ESB) have drawn 90 pounds of gear, learned how to survive a vehicle rollover, practiced their skills with tactical radios, negotiated obstacles, tossed practice grenades, and practiced dealing with civilians on the battlefield.

"The pre-mobilization training model that we are currently using is critical in our preparation for our deployment to Afghanistan," said Col. Greg Dreisbach, the commander of the 101st ESB. “Our soldiers are motivated and they are learning a great deal about their teams and themselves. I’m very proud of our citizen soldiers.”

“It’s all about training the troops out here on the ground,” said Staff Sgt. Raymond West, a Poughkeepsie resident. “It’s got to be hands-on and by the numbers.”

Raymond is a trainer with the 1096th Regional Training Institute who is also deploying with the 101st.

The three-week training period has been crammed with events to maximize training time, said. Col. Reginald Sanders, the Commander of the 369th Sustainment Brigade. The 101st is one of the brigade’s battalions and the 369th Headquarters Company is providing the support needed to keep training moving.

“The brigade is focused on the 101st Expeditionary Signal Battalion for pre-mobilization training,” Sanders explained. “This training was a collaborative effort, nine months in the making, between Joint Forces Headquarters - NY and the 369th Sustainment Brigade in order to provide the 101st ESB with the best possible training experience.”

The Fort Drum Central Issue Facility was the first stop for the 101st Signal Battalion Soldiers after arriving at Fort Drum. They outfitted themselves with the equipment they need for both training and deployment.

“I’m ready to get on the plane,” Sgt. Krystal Tesoriero from Fishkill said as she balanced a rucksack on her back and two duffle bags in her hands.

Soldiers reviewed their tactical communications skills and then moved onto the Humvee Egress Assistance Trainer (HEAT) to practice rollover drills.

“You’re not going to leave here until I feel comfortable,” Sgt. 1st Class Willie Short, a Brooklyn resident and training with the 106th Regional Training Institute told the Soldiers.

Spec. Daniel Hoysradt, of Ancram, said he enjoyed learning about hand grenades and mines, but hopes he’ll never have to use them.

“We don’t get to do this all the time,” he said as he practiced throwing a dummy grenade into a mock bunker.