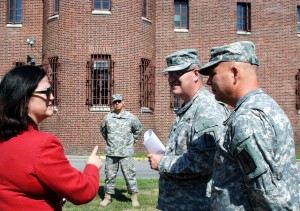 UTICA, NY--The Army’s top installation manager got a first-hand look at the facilities where Citizen Soldiers train for war, Thursday, as she visited New York Army National Guard armories here and in Syracuse.

"Overseas we see the tremendous operational support the Guard provides to the Army. We need to ensure these Soldiers have the facilities they need to train and prepare,” said Katherine Hammack, the Assistant Secretary of the Army for Installation, Energy and Environment.

Hammack spent the morning visiting the Utica and Syracuse armories to get a feel for energy conservation initiatives at New York’s 47 armories.

She learned about planned improvements at New York’s armories so that older buildings could meet the requirements of the 21st Century Army National Guard.

In Utica Col. (P) Raymond Shields, the Director of Joint Staff, showed Hammack around the armory, which was built in 1929 and 1930. He pointed out the changes that had to be made to the building in 2007 to accommodate the Headquarters Company of the 2nd Battalion 108th Infantry which currently drills there.

The construction preserved the 1930’s era look and feel of the armory without increasing the environmental footprint by creating a building inside the building. Using half of the vast 20th century drill shed floor, a modern structure encompasses administrative offices, arms vaults, supply, fitness and locker rooms.

"I’m fascinated with how New York preserved the heritage and structural integrity of the Utica armory while making better use of the space and resources," Hammack said. "Taking advantage of creative ideas like this to ensure our facilities are managed appropriately demonstrates that New York knows how to do things right."

Changes in force structure within the New York Army National Guard, such as moving a Military Police Company from upstate to New York City, drive the changes made to existing armories, Shields said.

In Syracuse, Major General Patrick Murphy, the Adjutant General of New York, showed Hammack around a newer facility, constructed in 1992 and 1993 as the headquarters of the 27th Infantry Brigade. The brigade headquarters sits on federal property at Hancock Field Air National Guard Base.

"This was an opportunity to draw on Ms. Hammack’s immense experience in energy sustainment to assist us in looking at facilities and infrastructure upgrades for the NY Army National Guard," Murphy said.

Appointed in 2008, Hammack is the primary advisor to the Secretary of the Army and Chief of Staff of the Army on all Army matters related to installation policy, oversight and coordination of energy security and management. She is also responsible for policy and oversight of sustainability and environmental initiatives and resource management.