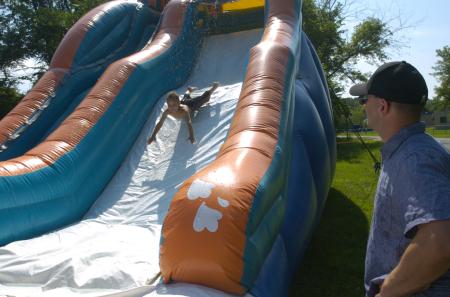 The Soldiers of the 42nd Infantry Division Headquarter and Headquarters Battalionmade the most of a summer afternoon during family day at the Sullivan Jones VFW Post in Poestenkill, N.Y. Aug. 12. Fun was the mission of the day for these Soldiers. The day was marked by the smell of burgers and hotdogs cooking, by the sight of Daisy the Clown smiling, and by the sound of children laughing as they tumbled down the waterslide and splashed water upon their parents. All of this was meant to make the day as enjoyable as possible for the Soldiers and their families, said Lisa Dethomasis, a member of the 42nd Infantry Division Family Readiness Group. The FRG is a program that sponsors family events and supports military families during crises or times of need, Dethomasis said, as she gave out bags of school supplies. Dethomasissaidshe joined in 2002, when her husband, Sgt. 1st Class Frank Dethomasis, was deploying. A quick glance showed her husband taking in the flavored ice stand nearby. As the admin non-commissioned officer poured more and more syrup onto his treat, Soldiers, clad in their civilian garb, introduced their families to their peers as they all waited in line for food. And all around, Soldiers were did what the sunny summer day demanded of them. They played horseshoes and cheered when a show clanked as it hit stake. They played volleyball and watched as their valiant slaps at the ball proved futile. They listened to the DJ as he played disco and country music. They gawked at Daisy the Clown as she got out of her custom-painted clown car. They also bought raffle tickets in the hope of winning big. Tina Spears, FRG head, tore off tickets as she stood behind a row of bags, each labeled with prizesa Soldier could win. Spears has been in the FRG since last August, and for her, giving back is no abstract concept. Spears said that her friends in the FRG and in the military helped her get back on her feet after a fire last April. “I can’t give back financially, but I can give my time,” Spears said. “If I can help in any kind of way, it’s great to be able to do that.” Yes, fun was the mission for today. And that mission was accomplished.