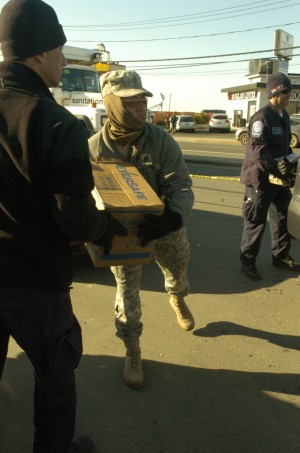 NEW YORK - When the National Guardsmen of Alpha Troop, 2nd Squadron, 101st Calvary came to Rockaway, their mission was to distribute food and water to New Yorkers recovering from Hurricane Sandy. Their mission expanded, however, as residents have come up to them with various ways they could help in the community. “It’s things that aren’t necessarily in our mandate, but it’s things that are helping people get back on their feet,” Capt. Frank Engel, troop commander for the 2-101 Cavalry, said. “Stuff you would do for regular neighbors, if you lived next door.” The Guardsmen of the 2-101 Cavalry are part of a force of more than 4,500 Servicemembers of New York’s volunteer military forces, mobilized by New York Governor Andrew Cuomo to help civilian authorities in recovery efforts. People have asked Engel’s Soldiers to do things such as checking up on homes or visiting at-risk individuals. Some of his troops, Engel said, drove to help fill prescriptions for people in the area. The Guardsmen of 2-101 Cavalry, based out of Geneva, N.Y., were able to know of these needs by talking to residents and working extensively through civilian organizations in the area. “There is a lot of need here,” Engel, a Little Falls, N.Y., resident, said. “The tough part is finding a solution to that need and finding the right person to help solve that need.” The unit sought to coordinate with “every contact that we could possibly get,” said 1st Sgt. Robert Davis, senior non-commissioned officer of A Troop, 2-101 Cavalry. “Sooner or later you get a grasp on which ones make a difference, so whenever you need something, you go to those people,” Davis, Leroy, N.Y., resident, said. The 2-101 Cavalry recently found a need while manning a distribution point in Breezy Point. After doing an analysis of the needs of the community, they introduced an active duty Marines Corps engineering unit with their contacts in Breezy Point. The Marines, members of the 8th Engineer Support Battalion from Camp Lejeune, N.C., then pumped storm water from homes, roads and public spaces. These efforts are comforting, said AJ Smith, a community leader and life-long resident of Breezy Point. Deep pools of standing water have sealed off whole sections of the community, cutting access to at-risk homes and making recovery efforts difficult. “Just the efforts of pumping that street has made our ability to get stuff done a lot quicker,” Smith said. “We just need that constant help getting that stuff removed. It’s making people feel like life is returning, slowly but surely.” Talking to local residents has also led to improvements in the distribution lines. These lines now offer rubber boats, cleaning supplies, gloves and clothes. Engel said these working these lines, which staffed with by firefighters, police officers, civilian authorities and military members of various branches, has been a rewarding experience. “My guys really like working here,” Engel said. “They’re long days, they’re hard days, but it’s really rewarding to see the things our guys have done, because it’s really amazing.”