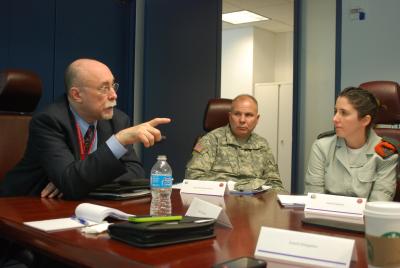 "While the threats that each country prepares for and deals with may be different, the challenges of a military operating in the civilian arena and working in conjunction with numerous civilian agencies in support of the civilian population are very similar," he said. Shields described how the New York National Guard’s coordinated the large-scale mobilization and deployment of more than 3,500 members of the state’s military forces both before and after the storm’s landfall.

The response was the state’s first-ever employment of the National Guard Emergency Management Assistance Compact, bringing an additional 800 Soldiers from supporting states to assist in the recovery mission, Shields said.

Transportation companies, logistics and power generation units from Pennsylvania, Massachusetts, Delaware, and Ohio all provided forces as part of the Joint Task Force Sandy response force. The response and recovery from Hurricane Sandy also included some 670 active duty servicemembers who provided unique equipment or skill sets such as water pumping capabilities to the National Guard joint task force dual-status commander, he explained to the Israeli delegation. Shields noted the importance of planning and exercising National Guard missions to the Israeli officials. Working with agency partners prior to a crisis helps rehearse critical actions and ensures links to local responders are in place before a storm strikes. "If you can handle the worse-case scenarios, you can handle anything," said Jerome Hauer, New York State Commissioner for the Department of Homeland Security and Emergency Services Disaster management. "It is always easier to gear down than it is to gear up." Like the National Guard, the Home Front Command was established in 1992 following the Gulf War to better respond with military forces tailored to homeland defense. The Israelis posed questions related to the National Guard’s interaction and interoperability with civil authorities, the challenges of command and control, support to civilian residents and healthcare challenges during disasters. "The need to develop and share a common operating picture or messaging across a variety of agencies and segments of the population, while dealing with power outages, lack of fuel and other results of the disaster are common challenges that we can help each other bridge," Deutsch said. IDF Maj. Zarit Gershkovitch, Director of Public Guidance for Home Front Command said she wanted to know more about how government communicated with people affected by the storm. "With so much reliance on social media, I wondered how the city would communicate," she said. Shields discussed the extensive media coverage of storm preparations by city and state officials, which continued well after the storm. Residents without power utilized their cars to charge smart phones to stay informed. Mitchell also explained the role of National Guard forces, alongside the multitude of first responders providing direct communication in those communities hardest after the storm’s landfall. Guardsmen were available to help direct residents to shelters, supply distribution sites or local relief agencies. "Outside of social media, much of the information for people was available right at the firehouses in their communities," explained FDNY Operations Planning Chief Fred Villani to the group. Those hubs of supply distribution or relief services were also information hubs to disseminate information. A common theme through all topics discussed with Home Front Command was the need for communication left and right, up and down, using liaisons officers with the multitude of agency partners.

"Emergency management is really about information management," said Kelly McKinney, the New York City Deputy Commissioner for the city’s Office of Emergency Management. "We were very impressed by the level of participation in the meeting," Deutsch said, "as well as the openness and willingness to share and express sometimes differing views, depending on where the person had operated during the response. The members of the delegation each took away a number of lessons, each appropriate for the professional field that they represent." Leaders of the National Guard and Israeli Home Front Command have exchanged personnel for training exercises and other learning opportunities since 2007 to share best practices in disaster recovery or terror response missions. The IDF established a full-time liaison with the National Guard, FEMA and NORTHCOM in 2010. "This event was the first of its kind in that it brought together key strategic and tactical-level military, governmental, and non-governmental agencies to discuss their immediate response lessons learned with several Israeli emergency response organizations," said Maj. William Powers from the National Guard Bureau operations staff that oversees training with the IDF. One of the best takeaways from the discussion, Powers said, is strengthening the ties between the two organizations. "Any opportunity we have to meet with our state, city and county emergency management partners as well as emergency management planners from other countries is highly beneficial," Shields said. "The discussion with members of the Israeli Home Front Command proved insightful and thought provoking." "The personal relationships that are built can benefit each organization for years to come," Powers said.