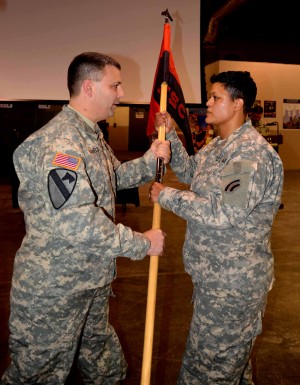 TROY, N.Y. -- New York Army National Guard 1st Lt. Lauana Dupigny, a Troy resident and a veteran of the Iraq War, took command of the Army National Guard’s 42nd Infantry Division Headquarters Support Company here March 1, 2013. “One of the most challenging commands in the Army is the headquarters command,” said Lt. Col. Christopher Daniels, the battalion commander. “She has done a tremendous job getting here and my hats off to Lt. Dupigny for her hard work and dedication.” She will replace Cpt. Nathaniel King, a Long Island resident, who will be moving on to the Division operations staff (G3)later this year. Dupigny enlisted in 1997 and served eleven years as an enlisted Soldier before receiving here commission as a second lieutenant in 2008. Dupigny assumes command of approximately 200 Soldiers. “Thank you for the opportunity to stand before you today,” Dupigny said. “I would not have made it without your unwavering support.”