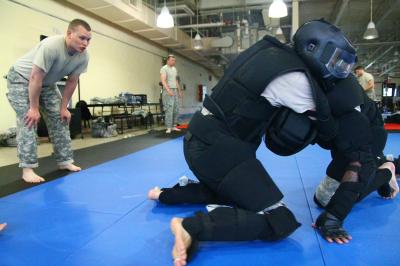 Sgt. David Eisenhart, an Athens, N.Y., resident and an automated supply soldier with Headquarters and Headquarters Detachment, Joint Force Headquarters, watches as soldiers fight during Level 1 Army Combatives Training at Camp Smith May 19. The training aimed to teach soldiers skills they could then teach back at their units. Read More: http://www.dvidshub.net/image/937319/new-york-army-national-guard-soldiers-learn-hand-hand-combatives-skills#ixzz2TwR2bNIN

They train fighters at Camp Smith.

New York National Guard soldiers grapple with each other on the padded red, blue and black mat. Staff Sgt. Abismael Gonzalez, an instructor with 2nd Battalion, 106th Regional Training Institute, watches them intently as the Soldiers methodically repeat each step of each move.

It’s graduation day for the nine soldiers at the five-day Army Skill Level 1 Combatives Course in Camp Smith, the New York National Guard’s training facility near Peekskill, N.Y. Gonzalez isn’t just watching to see if the soldiers have learned how to execute a perfect straight-arm bar or a rear naked choke. He’s looking for confidence, for the ability to teach others, for the lessons that the mat teachers, whether the Soldiers wins or loses a bout.

These soldiers will be going back to their unit to teach others the skills they’ve learned, and he wants to ensure they have it right.

Sgt. 1st Class Eduardo Hernandez, Gonzalez’s fellow combatives instructor, also watches the soldiers as they memorize their moves and use their opponent’s weight against them.

The Army’s combatives program, a hybrid creation, was formed from the basics of Brazilian jiu-jitsu ground fighting, with the throws and takedowns of judo and wrestling, and the strikes of boxing and muay thai.

The 21st Century Army National Guard may fight with tanks, armored fighting vehicles, missiles, and helicopters, but experience in Afghanistan and Iraq has shown that soldiers still need to know who to defeat an enemy in hand-to-hand combat or control an angry civilian without using a weapon.

Hernandez, like Gonzalez, has extensive experience in the Army combatives program, and under his watch, he has seen Camp Smith’s combatives program grow significantly. But Hernandez said he doesn’t like to brag, even though with his extensive fighting credentials, he could. The focus of his instruction is staying humble, learning how to fight and then learning how to bring that knowledge to others.

"Leave your ego at the door," Hernandez said. "Come willing to learn, come humble, and when you graduate, bring that training back to your unit."

Four of the Soldiers, all members of the 42nd Infantry Division Headquarters and Headquarters Battalion, are here at Camp Smith because their battalion senior noncommissioned officer, a close friend of Hernandez, wanted to have trained instructors for his unit.

For 1st Sgt. Thomas C. Strauss, a former infantryman and a Skill Level 2 Combatives graduate, learning to fight hand-to-hand builds a Soldier’s confidence and courage and teaches the Army’s core beliefs. In fact, sending Soldiers to combatives training was one of the first goals he had upon assuming leadership of his unit.

Of the four soldiers Strauss picked for combatives training, one was a sergeant, two were specialists and one was a private -- and only one of them had any prior martial arts experience. Because of this, the first day, one Soldier said, was rough.

Whenever a soldier made a mistake, the class had to do burpees, a pushup with a jump, as punishment.

"We had to do a lot of burpees the first day," said Pfc. Eric Monk, a Schenectady, N.Y. resident and a power generator equipment repairer with the 42nd Infantry Division Headquarters Support Company.

"They throw a whole bunch of knowledge at you, all at once. You just have to stay focused on what they’re telling you," Monk said.

Over the five-day course, which took place over two drill weekends, the complicated moves and the proper jargon became easier to remember through endless practice.

"We just repeated it," Monk said. "We did it day in, day out, every day, and after a while it just sticks with you, and then studying on your free time makes a difference."

"There was huge progression, from first coming in, not knowing anything, not knowing any terms, how to properly stand, how to do anything, and now coming in and still retaining knowledge and being able to fine tune it and plug away and be done," Smith said. Smith, who has done 14 years of martial arts, said fighting and hand-to-hand combat is a fun outlet for his aggressive personality.

"I’m a small person, I’m about 5’5", I weigh in anywhere’s from 140 to 145, and I like the fact that with the amount of knowledge and technique that I have, I can fend off and easily fight off someone that’s two weight classes above me," Smith said.

"It’s a benefit that I have enough knowledge of my body that I defend myself, my friends and my family, even with my height and size," he added.

This is the best part about learning Army combatives, Strauss said: learning that winning on the mat has not dependent on size, but on skill. Each loss becomes a learning opportunity, and each win comes with a shot of adrenaline.

Strauss hopes to send more of his soldiers to a combatives course, and he wants each soldier who graduates the course to teach more and more soldiers at each drill.

If Hernandez has his way, his course will be able to teach more soldiers and instructors. He wants to expand the program so more soldiers at a time can train and learn the lesson of the mat -- the discipline, the courage and the confidence it breeds.