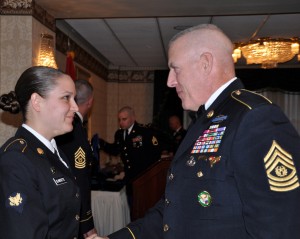 “You can no longer tell the difference between the active service members and the Guard and Reserve, they have the same impact,” he said.

“I amazes me how Guardsmen and women react at a moments notice and will walk away from their families, their homes and their jobs and immediately mobilize, bring their unique skills to defend our nation and return home as if they never served, this ability to switch on and off demonstrates a level of professionalism unique to the Guard,” Grippe added.

Grippe, who comes from New York, was the guest of honor at the Enlisted Association of New York National Guard dinner honoring outstanding junior enlisted and noncommissioned officers in the New York Army and Air National Guard.

“It is truly an honor to be here in the presence of these exceptional enlisted members,” Grippe said. “Over the past 11 years, the New York National Guard has been instrumental in defending our nation and supporting CENTCOM objectives.”

• And Staff Sgt. Jimsey Roberts, readiness NCO for the 719th Transportation Company was named Active Guard and Reserve NCO of the Year.

“It’s incredible how these warriors perform under pressure. It’s impressive to see what they are capable of, they are truly the best of the best,” said Command Sgt. Maj. Frank Wicks, New York state command sergeant major.

• Senior Airman Christopher Peterson Airman of the Year from the 106th Rescue Wing;

"This is a very impressive group of airmen and based on the competitive nature of the competitions they won, I expect these individuals will go far in their military careers," said Chief Master Sgt. Richard King, New York Air National Guard state command chief. In his remarks, Grippe urged the enlisted leaders to prepare their soldiers and airmen for service in the future, despite plans to withdraw combat forces from Afghanistan.

CENTCOM still has a lot of work to do and the Guard still has a role in supporting theater operations, Grippe said.

“There will continue to be opportunities for the National Guard to help with power projection and we need to ensure soldier and family readiness by optimizing strategic coalitions and partners,” he explained.

Grippe emphasized that soldiers at all levels need to remember “the basics” and remain consistent when training to the standards, as it correlates directly to success in combat.

“The basic skills to fight, which include physical fitness and combative training, weapons proficiency, individual skills and recently added structured self development create muscle memory and allows soldiers to react accordingly to protect themselves and the force,” he said.