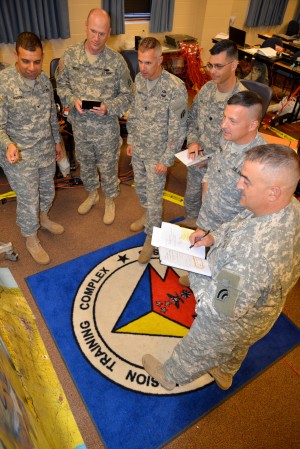 The 42nd Infantry is supporting the California Guard’s 40th Infantry Division, as they are evaluated during their Warfighter Exercise (WFX). The WFX is an electronic battle simulation designed to test and evaluate a division staff on all levels of operations, communications, and adaptation on the battlefield.

“The Warfighter places the primary ground units into enemy territory and terrain,” said Paul Spivey, a simulation analyst and trainer. “The simulation involves everything from maneuvering forces to securing an objective. We are able to train high-level commanders and staff on many aspects of war strategy.” Arriving at Fort Leavenworth was only half of the training battle for the 42nd “Rainbow” Division.

“We have been preparing for this Warfighter for about a year,” said Sgt. Major Edwin Garris, the division Fires Operation Sgt. Major and resident of Buffalo, N.Y. “We needed to work closely with the 40th in order to help them achieve their goal of a successful Warfighter.”

Once on the ground, the 42nd Division, now role-playing the X Corps Headquarters, initiated their operational plans using the Army’s new collaboration tool, the Command Post of the Future (CPOF). CPOF gives commanders a clear picture of current operations in real time. The CPOF collects data and analyzes the data to produce movement patterns of both friendly and enemy forces as they move across the landscape. Based on that analysis, commanders and staff members plan and execute detailed decisions in less time.

“Very simply put, the WFX allows us to train on our go-to-war tasks,” Andonie said. “Not only is this exercise building a stronger, more relevant organization for the Army, but also for the citizens of our hometowns.”

Once the battle commences, operations run 24-hours a day, testing the effectiveness of synchronization within staff sections.

“The training is invaluable,” said Maj. Michael Rodriguez, the Battle Major for the WFX and resident of Queens, N.Y. “We are able to hone our skills as a staff.”

The WFX will also provide interaction with professional role players, ranging from media on the battlefield to local civilian leaders to criminal organizations, all the while fighting a war with a comparable enemy force. The 42nd is the command and control unit for over 62,000 simulated Soldiers and Airmen on the electronic battlefield. Over 17,000 vehicles and 800 aircraft have to be refueled, supplies have to be coordinated, and food and water transported, even the tons of simulated mail have to be delivered.

In the past, the natural progression is for the division to be evaluated first, and then move up to the corps level, supporting the next division being evaluated. This WFX will challenge the 42nd Division staff first at the corps level, a demanding war simulation at the MTC.

“We are using this exercise to prepare the division headquarters for our Warfighter next year,” said Brig. Gen. Steven Ferrari, the 42nd Infantry Division Deputy Commander and the commanding general for this exercise. “These exercises refocus us from operation in counter-insurgency back to unified land operations.”

The 42nd is scheduled to participate in the WFX evaluation in 2014.

“Overall, the division is doing a great job and meeting the training objective,” Ferrari said.