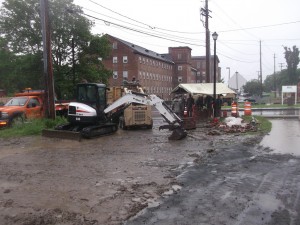 COHOES--Inclement weather did not deter the morale of the soldiers from the 1156th, who worked the last week of their Annual Training, to complete the three-year project in Cohoes, NY.

COHOES, N.Y.--After three years of annual training, engineers of the New York Army National Guard 1156th Engineer Company withstood heavy spring rains to put the finishing touches on a community project here to restore a clearing along the Erie Canal, unused for the past 100 years. “The city of Cohoes wanted to make this path more accessible to tourists and local residents,” said 1st Lt. Nina Vanyo, officer in charge of the project. Vanyo explained that the 1156th Engineers and the Department of Public Works for the City of Cohoes have worked very closely, in order to see the successful completion of this project. The project first began clearing out the old enlarged Erie Canal near locks 14, 15 and 16 in June 2011. The canal had been abandoned in 1911 and debris growing over the site had made it more like an overgrown jungle, Vanyo said. The Soldiers provided a week-long effort as part of the unit annual training again to improve the site in 2012, first clearing debris from the canal, then grading and installing drainage along a walkway. Their efforts helped create a public park located on the site of the original Erie Canal. “The first week of annual training, we go over basic soldiering skills, and things that would help us in a combat environment,” Vanyo explained. “The second week, we spend working on projects within the community.” Working very closely with Ed Tremblay, Director of Economic and Community Development, Soldiers from the 1156th spent their final week of training making modifications to the grading of the main road and installed drainage culverts along the pathway. The final work creates a new stone dust trail along the west wall of the canal. The Cohoes project is an Innovative Readiness Training opportunity for the engineers. IRT projects allow Army National Guard and Army Reserve units the ability to take part in local community projects when the work involves the unit’s combat tasks and the job is not something the municipal workforce or a private company would ordinarily be able to do. “I’d rather my Soldiers do their jobs in the community,” said Capt. Daniel Colomb, 1156th Company Commander. “It’s great to see a historic area that has been reclaimed by its citizens, and to be a part of it.” Spc. Radoslaw Mosiej, who has been a part of this project for two years as well, acknowledged the desire of the Soldiers working in Cohoes to use their engineering skills whenever practicable. “I think it’s a lot better because we get to give something back to the community, and it’s more meaningful for us to be able to see the fruits of our labor,” Mosiej said. The last two days of the project were spent building a brick replica castle, the symbol of Army engineers. This enduring mark left by the 1156th Engineer Company will serve as a reminder of the Army National Guard’s role in serving their communities.