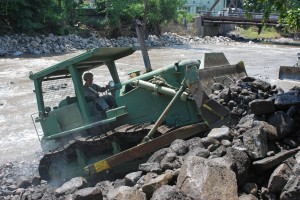 Using bulldozers, excavators, and just plain muscle, about 250 troops cleared tons of rocky debris from flood-ravaged waterways in the towns of German Flatts and Fort Plain, and helped Village of Mohawk residents remove rotting, muddy, and sodden property from their homes.

"We helped the citizens to have a greater sense of security during threatening weather conditions as they recover from the flooding," said Lt. Col. James Freehart, a Latham, N.Y. resident who commands the 204th Engineer Battalion and headed Task Force Engineer.

On June 27 and 28, several thunderstorms dumped massive amounts of rain into Mohawk Valley streams, causing them to rise and flood nearby towns. Local officials asked for help with reconnaissance and evacuation, and members of the 2nd Battalion 108th Infantry and 1427th Truck Company responded within hours with high-axle vehicles which can ride drive through floodwaters.

As the scope of the flooding became clearer, New York Gov. Andrew Cuomo called up Soldiers of the 204th Engineer Battalion and the 206th Military Police Company on July 2. Troops of these units, along with individual Soldiers and Airmen from other New York National Guard units, formed Task Force Engineer.

Using a bulldozer and a hydraulic excavator, the 827th Engineer Company drew first mud in German Flatts the afternoon of July 3, about 24 hours after Cuomo called them up.

Longtime resident Libby Mack, who helped the engineers survey the worksite, was aghast at the effects of the flood.

In addition to re-routing Fords Creek, the torrent had also deposited silt, boulders, trash, dead animals, rusted corrugated pipe, damaged wood and other flotsam into the creeks and along their banks, she said.

"It obliterated my property," she said.

"I grew up playing in these creeks," he said. "It’s crazy what happened."

Along with removing the debris, their mission was to firm up the banks, Capt. Chad Clark, the company commander from Chester, said. This should stabilize them, and prevent more damage if more flooding occurs, he explained.

The flood had created more channels in the bed of Fulmer Creek, and part of their job was to unite these streams into one waterway again, he said.

"We’re going to try to put it back the way it was so it’s less of a problem next time," said Moffett, of Dryden, N.Y.

The bulldozer and a hydraulic excavator are equipped with treads. With astonishing ease, the Soldiers drove them right down into the brown waters of Fulmer Creek and Fords Creek and began clearing them of rocks, boulders and other flood debris.

"It’s running a whole lot better," Day said of Fords Creek, about an hour after the engineer Soldiers began working. "Leave it to the military. They’ll get it done right."

The Soldiers seemed to work quickly and efficiently, Morgan said.

"I’m sure all the neighbors will like it, upstream and downstream," he said.

Mack also noted the Soldiers’ efficiency, and the fact that Fords Creek was running faster. The Soldiers, she said, are awesome.

"If I had a million dollars, I hand it out to them," Mack said.

There are other benefits as well to having the Soldiers remove the flood debris, Day said.

"It’s good experience for these guys," he reflected. "The state has the equipment, they might as well use it."

In Fort Plain, Soldiers of the 152nd Engineer Company were confronted by an island of flood debris in the middle of Otsquago Creek. Composed of shale and other rock, this island was about 500 yards long by 75 yards wide, according to Sgt. 1st Class Mark Flint, of Natural Bridge, N.Y.

"It dammed up the water and caused flooding in the area," Flint said.

There was four feet of water on the Fort Plain streets at one point, and several of his relatives lost their homes, said Fort Plain resident Jack Zeidner.

"It made me sick to see all the damage," he said. "It was devastating."

Like their fellow Soldiers in German Flatts, the troops used bulldozers to remove the debris from the center of the creek. The bulldozers churned noisily through the muddy waters, and the creek bed echoed with sound of crashing rock as the engineers pushed tons of materials into the creek’s banks to shore them up.

"They’re doing a good job," he said. "It’s going to alleviate this problem."

Upstream, engineer troops worked with municipal workers, state workers and civilian contractors to remove debris from another part of Otsquago Creek. Using hydraulic excavators, the workers and contractors loaded flood debris into the 152nd Engineer Company’s 10-ton dump trucks for the troops to haul away.

Coordination between the troops, workers and contractors was pretty seamless, said Capt. Eric Butcher, 152nd Engineer Company commander. They all use the same type of equipment, and for the most part, speak the same language,

Their job was to "knock on doors, and see what needs to be done to clear debris," explained 2nd Lt. Andrew Bognaski, a Lafargeville resident.

They arrived on July 3, worked with civilian authorities, and began going block by block and house by house to see who needed help, Bognaski said. In addition to hauling garbage out of homes, the Soldiers worked with 204th Engineer Battalion troops, who used front-end loaders and other vehicles to pick up piles of debris and deposit them in dumpsters.

Mohawk resident Sharon White Douglas was moved to tears by the Soldiers’ efforts. They’d been on their own, using a wheelbarrow to move garbage to dumpsters, she said.

"Neighbors have been helping, but they’re in the same boat," Douglas said as the military police Soldiers lugged water-logged dry wall and ceiling tiles out of her house. "Five days of this...we’re tired. This is a Godsend."

The Soldiers’ help relieved their emotional strain as well, and enabled them to get a new hot-water heater and furnace installed sooner, she said.

"We’re much further along, thank God," she said. "This would’ve taken us forever to clean up."

The mission was something of a homecoming for Staff Sgt. Corey Guido of the 206th Military Police Company, who had taken part in disaster relief operations following floods in New York State. A Boonville, N.Y. resident, Guido was raised in Mohawk, and still has family there.

"I’ve never been here for a military mission," he reflected. Clearing the debris from homes minimized citizens’ exposure to mold and mildew and helped prevent health problems, he added.

The job was hot, muggy and muddy for residents and troops alike. Guido said he saw one Soldier whose Army Camouflage Uniform (ACU) was covered in muck, from top to bottom.

"You couldn’t even tell he was wearing ACUs," he said.

But the Soldiers seemed undaunted by the task, and the fact that it had little to do with military police work.

"We did all this at the tail end of Hurricane Sandy," Guido said. "We’re just happy to be here helping out."

The job needed to get done, said Cpl. Patrick West, of Utica, N.Y.

"Guys are motivated," he said. "They don’t mind getting dirty. They want to get the job done."

Mohawk resident Frank Smithson was also grateful for the efforts of the troops, and for the assistance of Mohawk and state authorities.

"It could’ve been three times worse without that help," he said. "A lot of people came together in a short amount of time to help."