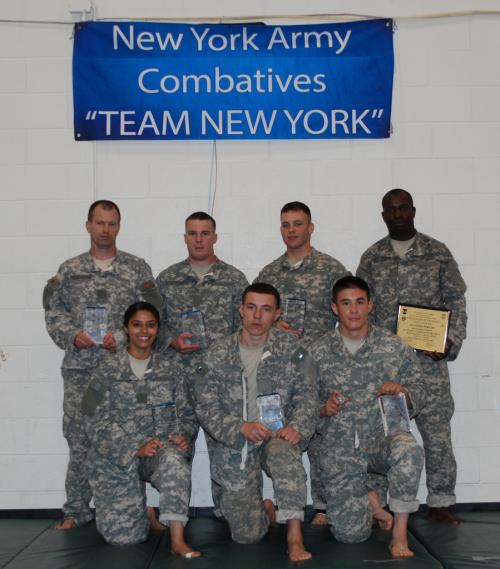 CAMP SMITH TRAINING SITE, CORTLANDT MANOR, N.Y. -- Over a dozen Soldiers competed in the New York Army National Guard’s First Annual Combatives Tournament here on July 27, and the winners in each of the seven weight categories may have the chance to become part of the team to represent the state at the 2014 All Army National Guard Combative Tournament in Ft. Benning, Ga.

Combatives is a combination of Judo, Jujitsu and other techniques which enables Soldiers to prevail in hand-to-hand combat. The 1st Battalion, 106th Regional Training Institute (RTI), organized and held the tournament.

"Today’s combatives competition is the first of its kind for the New York Army National Guard, and it brought together Warriors from every (major command), from Buffalo to Long Island," said Lt. Col. Robert Giordano, the commander of the 1st Battalion, 106th RTI. "This intense competition brought a true reflection of our New York Army National Guard Force here to Camp Smith to compete. I am thankful to my fellow commanders who sent their Soldiers to compete and I look forward to seeing even more Warriors next year."

The tournament mirrored a ju-jitsu competition, with one-on-matches on tumbling mats. There are four certification levels in combatives, and Soldiers were required to be certified as level one or higher to take part in the tournament. Soldiers won matches by compiling the most points, or if their opponents conceded matches by submitting, also known as "tapping out." Combatives instills the warrior ethos, in addition to building physical fitness and confidence, said tournament director Sgt. 1st Class Eduardo Hernandez, of Scotch Plains, N.J. He hopes the New York Army National Guard forms a team to compete nationally, and tournament winners could be part of that team, he added.

But combatives isn’t just for competition, he stressed. "It’s health and fitness, physical conditioning, it’s mentally grueling and physically grueling," he said. "This is giving the Soldiers, the American Soldiers, the upper edge on the enemy." Capt. Linette Palladino, a member of the 53rd Digital Liaison Detachment and winner of the flyweight category, agreed.

"You need to be able to defend yourself physically," said Palladino, of Hoboken, N.J. "Combatives is a mentally demanding sport. "You really have to memorize technique, and get it down rote so that you can react instinctively to certain situations."

There’s always a chance a Soldier may need to resort to hand-to-hand combat, said Sgt. 1st Class Stephen Palmer, a member of the 466th Area Support Medical Company, who took first place in the middleweight category.

"If you get to a point where you’re out of ammo, and all you have is just your hands, that’s what you’re going to have to use," said Palmer, of Granville, N.Y.

“For some of us this is not just a chance to compete, it’s a chance to sharpen our skills," he said. Combatives also builds camaraderie and a competitive atmosphere, said Level 4 combatives trainer and tournament non-commissioned officer in-charge Staff Sgt. Abismael Gonzalez, of Queens, N.Y. “Combatives is knowing that you could lose, and facing that challenge,” he said.

Many of the Soldiers attested to the training they had to do in order to get there, and how important endurance training and diet are in preparing for a tournament.

Heavy-weight winner Sgt. Adama Ilboudo of the 719th Transportation Company said he competed in harder tournaments. Ilboudo, of the Bronx, N.Y., holds a third-degree black belt in Judo, and competed in the European Tournament

There’s nothing complicated about getting to that level, he said.

“My diet is this...if you eat hard, then you have to work out harder," he stressed.

Based on their performance in the tournament, the Soldiers would do well at the All Army National Guard Combative Tournament, Hernandez said. Their talent pool, consists of some national league wrestlers and Ju-jistu practitioners, he added.

"I think we have an absolutely great chance," he said.

"Competitions like this keep us more fit, and battle-ready to fight the fight," he said.