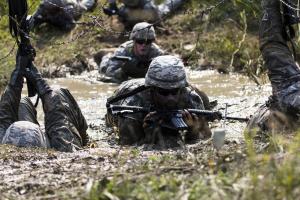 LATHAM, NY -- Though they’ve been down some rough roads in the last year, the Soldiers of the New York Army National Guard’s 42nd Combat Aviation Brigade are expecting to fly -- and thrive -- in the deserts of Kuwait.

About 180 brigade troops and their loved ones kicked off their pending Kuwait deployment with a mobilization ceremony at Shaker High School here Sept. 7. The Combat Aviation Brigade (CAB) troops are headed to Fort Hood for more training, and are expected to deploy to Kuwait around the end of the year.

Another 350 Soldiers assigned to the 642nd Aviation Support Battalion, which will deploy with the headquarters, held farewell events in Jamestown, Patchoque and Rochester New York on Sept. 7 and Sept. 8, as well.

Brigade troops completed individual pre-mobilization training at Fort Drum in late summer, and have undergone new equipment, night-flying and other training in the past year. Despite short notice, the troops, their families and others have stepped up for the deployment, said CAB Commander Col. Albert Ricci, of Ballston Lake, N.Y.

“It’s been rough,” Ricci said at the ceremony. “It’s been a lot of sacrifices.”

The unit’s mission in Kuwait will be complex and dynamic, and will include joint training and partnership opportunities with surrounding nations, Ricci said. The mission will build security, stability and mutual interest in the region, he added.

The unit has the apparatus, with its helicopters and support personnel, to make that happen, Ricci said. He’s confident the unit will make the nation, New York state and the New York Army National Guard proud, he concluded.

The mission of Army aviation units is inherently difficult and dangerous, and Kuwait’s harsh environment will increase the hazard slightly, Ricci remarked after the ceremony. But the CAB is used to these challenges.

“We’re not a relaxed unit,” he said. “We’re always on the edge. We’re just transferring what we do over here in the states already to Kuwait.”

Almost half the unit’s Soldiers have deployed at least once before, and some unit members have deployed up to three times, Ricci said. Their ranks represent a vast range of age and experience, he added.

“We’re passing that knowledge down onto our younger soldiers,” Ricci said. “We have 18-year olds to almost 60-year olds, so we have a very diverse unit.”

These young troops will have the chance to grow during the deployment, Ricci said. “That young Soldier will find out that he’s going to have a lot more responsibility, and be counted on to perform a certain job,” Ricci said.

That, in turn, will strengthen the unit, he explained.

“We’ll always be able to take what we do on a deployment, bring it back home, to our state, to our country, as good experience,” Ricci said.

The unit’s range of expertise and experience is reflected in unit members: Spc. Jeffrey Houck, a communications specialist, and Capt. Adam Kemp, a Blackhawk pilot.

This is Kemp’s first deployment, and he’s benefited from some of the knowledge-sharing Ricci referred to.

“I’ve been able to get some good experience within the unit and fly with a lot of talented people who know their stuff,” said Kemp, of, Clifton Park, N.Y. “It’s been fun.”

Kemp, in turn, spoke to the harsh desert environment and hazards of flying there. While New York state has hills and trees, the desert has heat, sandstorms and lack of navigational reference points, he said.

“We’ll be flying in a challenging environment, that’s for sure,” he said. “I’m definitely looking forward to the challenge.” Though his main role will be planning and support, he hopes to fly as much as possible also, Kemp said. He gets an adrenaline rush from flying and controlling the aircraft, he added.

“Why wouldn’t I love flying?” Kemp reflected. “It’s just so much fun, you know, being in the sky,”

Kemp has a wife and five-month old daughter. Being separated from them will be a hardship, but he plans to stay in contact via computer and phone, he said.

“She’ll be a year and half (years old) by the time I get back,” he said. “So I’ll be missing a lot of firsts, you know, the crawl-walk phase.”

“When family members reach out and embrace your family, it makes things a lot easier,” he said.

Houck, who served with the U.S. Marines in Iraq, said he comes from a military family. His father is Command Sgt. Maj. John Houck of Joint Force Headquarters, New York Army National Guard, and his mother was a sergeant in the Marine Corps, he explained.

“They support me,” said Houck, of Baldwin, N.Y. “They know that this is what I’m good at and what I love to do. They know this is where my heart and head are at, and that I’ll do a good job.”

He works as a computer consultant in the civilian sector, and got his third military occupational skill while a member of the CAB, Houck said. The train-up for the deployment was rewarding and fun, he added.

“I took everything that they taught us to heart, because you train like you fight,” he said. “I had a great time.”

His job in Iraq was both stressful and rewarding, Houck said. He’ll be performing similar duties in Kuwait, he added.

Houck tips for the thriving on the deployment include staying in contact with their loved ones, and other blunt advice.

“Stay hydrated,” he said with a smile. “Stay active. Don’t get bored, you’ll get in trouble.”