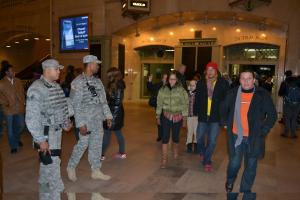 NEW YORK - Thanksgiving week is no holiday for the New York National Guard’s Joint Task Force Empire Shield, which will have all hands on deck during the busiest travel days of the year.

The Soldiers and Airman are on State Active Duty under the orders of New York Governor Andrew Cuomo. The New York National Guard has had a security force assisting police in New York City since the attacks of Sept. 11, 2001.

Experience has shown that the Wednesday before Thanksgiving is the busiest travel day of the year, Riley stressed.

"We’re going to be extra vigilant, because it’s the busiest day of the year," he said. "Most people are taking public transportation."

Almost three million commuters travel in and out of the city on normal business days, Riley said. They expect that amount visitors for the annual Macy’s Day Parade alone, he stressed, and the parade itself will have about 8,000 participants.

They plan to have their most robust security presence during the busiest hours - meeting high-travel volume with manpower, Riley said. They’ll also be out in full force before, during and after the Macy’s Day Parade, said New York Air National Guard Senior Master Sgt. Ed Mondezie, the senior enlisted advisor for the task force.

Their partnerships with these agencies remains strong, he emphasized.

Customer service is also part of the job, and task force members often find themselves giving travelers directions and answering other routine

questions, Riley said. This is a key skill for task force members, since it encourages the public to help and come forward with information, he stressed.

"It’s very important to have that public interaction," he said. "We always treat the public with courtesy and respect."

The New York National Guard men and women packed the supplies for 3000 turkey dinners at the Jacob Javits Convention Center. The supplies were delivered to area distribution centers by Empire Shield Soldiers and Airmen and other Guard Soldiers from the 53rd Troop Command on Tuesday, Nov. 26. Other deliveries are set for Wednesday, Nov. 27.