September 24, 2021 | 5:30 pm COVID-19 Vaccines
On August 23, the FDA announced the full approval of the Pfizer-BioNTech vaccine for the prevention of COVID-19 disease in individuals age 16 and older. Read more.
Details 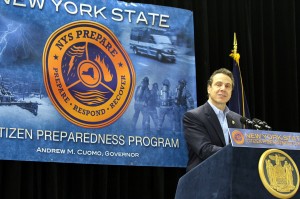 A 17-member team of Guard Soldiers and Airmen on state active duty status will deploy across New York to train participants in the Citizens Preparedness Corps Training Program.

Other Guard Soldiers and Airmen will be called upon to help set up and organize other training events across New York, with events already scheduled for Utica and in Rockland County on Feb. 8.

The program aims to give citizens the knowledge and tools to prepare for emergencies and disasters, respond accordingly, and recover as quickly as possible to pre-disaster conditions.

The disaster and emergency response starter kits, also known as a "go-kit," handed out at the events included a first-aid kit, face mask, pocket radio with batteries, food bars, emergency blanket and other key items to help citizens in the immediate aftermath of a disaster.

While the National Guard and other first responders play a critical role in New York’s response to disasters, the real first responder is every citizen, the governor told participants in the two training sessions.

The program, designed by the New York State Division of Homeland Security and Emergency Services Office of Fire Prevention and Control covers a broad range of emergency preparedness topics, like developing a family emergency plan, stocking up on emergency supplies, and registering for NY-Alert, the free statewide emergency alert system.

People listened closely to the training, and occasionally applauded. Though the program included a short break, the Farmingdale audience encouraged trainer Capt. Rafael Castillo to continue the class without a break, according to trainer Master Sgt. Pete Towse.

It’s a great mission and the trainers enjoy the job, Towse said.

Though he felt that the presentation was a bit long, it still had good information and preparedness points, said Staten Island resident Abe Aruch. The information should be taught in schools, he added.

"We take that stuff for granted on a daily basis," he said.

The go-kit is a good starting point for emergency preparedeness, he said.

"You build off of that," Aruch added.

While speaking at each training session, Cuomo announced the launch of a new website, http://www.prepare.ny.gov, which serves as the digital home for the Citizen Preparedness Corps community. The website offers information about additional training, disaster preparedness tips, and ways to volunteer in the event of a disaster.

Ensuring that residents are prepared for emergencies is more important than ever, the governor said.

While there were only a handful of federally-declared disasters during his father Mario Cuomo’s 12 years as governor from 1982 to 1994, there have been nine in his three years as governor, Cuomo told the Staten Island audience.

In addition to Superstorm Sandy in October 2012 - an event of historic consequence - there have been other unprecedented situations, like earthquakes and flooding, in upstate New York, he stressed.

"This is a much different reality that we’re dealing with," he said. "Whatever is happening is generating an extreme weather pattern like we’ve never seen before. That is a fact. The extreme weather is a fact."

New York is giving residents training and equipment to go with their willingness and desire to be of service, Cuomo said.

"Just showing up for the training says that you are stepping up to be the first to prepare yourself, to prepare your family, and prepare the community for what could happen next," Maj. Gen. Patrick Murphy, the adjutant general of New York, told the Staten Island audience.

Their presence at the event signified their commitment to personal, family and community preparedness, he added.

Patricia Benjamin, a project coordinator for Project Hope, was pleased with the event. The Jewish Board of Family and Children’s Services runs Project Hope, which helped Superstorm Sandy victims, Benjamin said.

"I was very pleased to hear the information we got," she said. She was especially glad that Cuomo acknowledged Staten Island citizens, who mobilized on their own ahead of first responders, to help their neighbors in the aftermath of Superstorm Sandy.

She also liked the training program and website, which she described as a clearly designed structure of response.

"There’s actually something in place for the citizens now," she said. "We have no control over how a disaster will affect us. But we can control our response."

The training program shows people how to turn off home-energy systems, but warns them not to attempt to turn them on again until they’ve been inspected and approved by professionals.

That was one of the most important parts of the program, Benjamin said.

"A lot of people may not know that minor detail, which is actually a major detail that could avert disaster," she stressed.

People and first responders suffer from trauma and emotional exhaustion during disasters, so she was also glad that the training stressed the need to mitigate those psychological effects, Benjamin said.

Susan Miserandino, a senior planning analyst for the utility Con Edison who deals with storm issues, said the training delivered at the Saturday session was very relevant.

The training program will help citizens to be better prepared, she said.

"If not for themselves, for their family members," Miserandino added.

Miserandino is already using the go-kit as a starting point for her own emergency preparedness. In the days following the event, she added rope, garbage bags and latex gloves to the kit, she said.

Big weather events are a new thing for New York, and citizens didn’t think much about preparing for emergencies before Superstorm Sandy hit, she said.

"We never experienced anything like (Superstorm) Sandy before," Miserandino said. "It’s the old adage...nobody thinks it’s going to happen to us until it does."